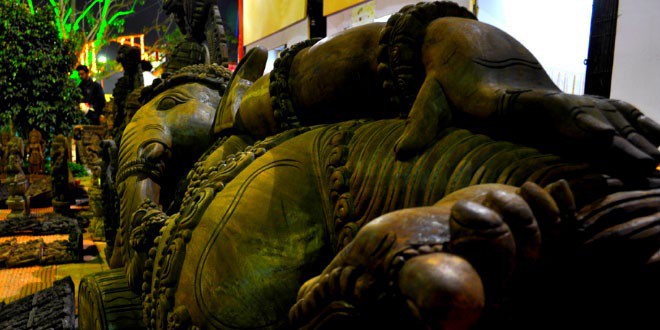 Awakening: Lord Ganesha English Poetry Ganesha is the formless Divinity – encapsulated in a magnificent form, for the benefit of the devotee. As per Hindu mythology, he is the son of Lord Shiva and Goddess Parvati. Gan means group. The universe is a group of atoms and different energies. This universe would be in chaos if there was no supreme law governing these diverse groups of entities. The Lord of all these groups of atoms and energies is Ganesha. He is the supreme consciousness that pervades all and brings order in this universe.

Ganesha is a very popular god in Hinduism and in India, and was one of the most worshiped. Hindu tradition states that Ganesha was a god of wisdom, success and good luck. He was also giver of different types of favors. The Hindu tradition calls Ganesha as the Vighneshvara.

Here we have little poetry about ‘Lord Ganesha‘, name of the poem is “Awakening”.

I asked for His help
I called on His name
One of His many Names.

I asked not for myself
I sought help for many
And for what seemed insurmountable.

And as I prayed
I felt His presence wash over me
Calming me, soothing me, stilling me
Wrapping me in His warmth
Until all I could do was stop
And be still and feel His presence
And love Him.

Ganesha Chaturthi is the 10 day-long Hindu festival held on the birthday of the Lord Ganesha. He is the son of Shiva and Parvati. It is celebrated all over India. The festival is held on shukla chaturthi in the Hindu month of Bhaadrapada and ends on Anant chaturdashi. For example in 2020 it will be celebrated on August 22th. It is celebrated widely in Maharashtra. On this occasion women make special “modaks” which are loved by Lord Ganesha. Lalbaug is a place that every year celebrates Ganesh Chaturthi on a large scale.

There are Ganesha’s form like Bal Ganesh, Lalbaugchya Raja, Siddhivinayak Maharaj, and Dhagru Sheth. The most popular ones are: Shreemant Dagdusheth Halwai Ganpati Mandir and Lalbaugcha Raja.