Feeding On The Delhi-Jaipur Highway 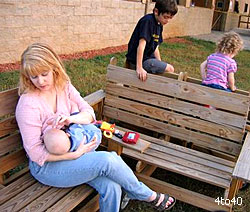 It was two-and-a-half months since the baby was born. I had not stepped out of home after childbirth. That was not because I was ill or was inept at handling the new-found responsibility of parenting. It was because I could not imagine feeding in public, let alone do it.

I often wondered how women managed to do it in buses, railway stations, trains, anywhere. So when we started planning a holiday, I was very worried. The thought of feeding the baby in public was quite intimidating. You just need to brace yourself to do it, I kept telling myself.

Obviously, it was easier said than done. “Stop treating your mammary glands as something you need to hide or be ashamed of,” said a friend. “Tell yourself it is the milk tap at the community centre. That should help,” said another.

I tucked in all these useful bits of advice and decided to just do it. Like that well known sports brand. And I agreed to go for the trip. Still, when we started, I was a little edgy and kept hoping that my son, Vihaan, would sleep throughout the journey. Which he mostly did. But he woke up for his lunch when we stopped for a snack midway. I wrapped a shawl around myself and made my husband, his brother-in-law and nephew stand around the car, shielding me from public view. As I fed, I closed my eyes and imagined they were the walls of my room.

That was the first time. I hoped I would not have to repeat the exercise on the way back. But, the next time came too soon. In fact, just a day later. We had gone out to shop and Vihaan was getting a little cranky. He had not fed properly before we left. My hubby proposed we go back home, feed and then come back to resume shopping. He seemed more uncomfortable with the act than me. My inhibitions must have rubbed off on him.

I decided it was time I took some initiative. “How about the car parking area,” I said. He wheeled round to say “are you sure?” I nodded firmly – very, very firmly. And have not looked back since. Now I have quite a few feeding feathers in my cap. I’ve done it on a train, during a flight, and the most unforgettable one – held a conversation with a stranger while doing it at a party.

Krishna’s Childhood in Vrindavan: When Yasoda and Nanda found Krishna as their son, they performed …