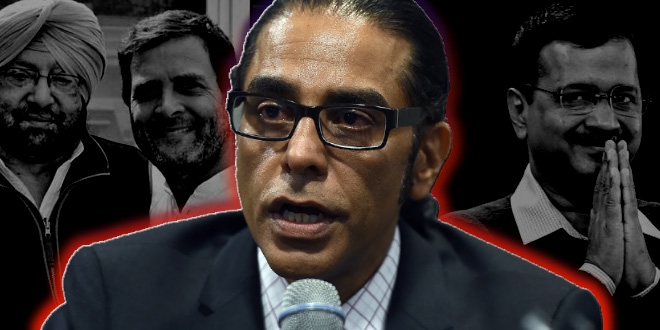 Netizens have noticed the video running as an advertisement on YouTube that is against the Google Advertiser Policies.

Amid ongoing farmers’ protests in Punjab, Haryana, and Delhi, it is evident that Khalistani supporters have hijacked the protests and are furthering their own nefarious agenda. The infamous Islamic organization, Popular Front of India, known for its connections with Islamic extremists, has extended support for the protesters. Khalistani group Sikhs For Justice (SFJ) has announced support for the protests as well. Now, ads have started appearing on YouTube and other social media platforms urging people to join the Khalistani movement.

Gurpatwant Singh Pannu, founder of SFJ has announced financial support of $10 million for the farmers who have faced any loss while travelling to Delhi. In a recently uploaded video, Pannu asked the farmers to send SFJ details of the losses they have faced, and his organization will reimburse the amount.

In return, Pannu asked to join the Khalistan Movement. He is trying to buy votes for the ‘referendum’ his organization has announced to free Punjab from India and form Khalistan, a nation for Sikhs. Khalistani forces are getting a lot of support from Pakistan.

In the video, Pannu said, “Sikhs For Justice has announced $1 million for the farmers of Punjab and Haryana. The funds will be given to those who got injured or faced any losses while travelling to Delhi.” He asked the farmers to make calls to Sikhs for Justice on November 30, the day on which Sikhs will celebrate the birth anniversary of the first Sikh Guru, Guru Nanak Dev Ji.

“On November 30, register your vote for Punjab referendum. This is a fight between Hind and Punjab. Khalistan is the only way out. These black laws that are taking away your lands can only be countered with freedom. The day Punjab gets free, no one will be able to take over any farmer’s land in Punjab,” he further added.

The Khalistan and SFJ tentacles in the farmers’ protest

It is important to note that the Khalistan organisation SFJ, funded by Pakistan, had earlier declared a grant of $1 million for farmers in Punjab and Haryana in lieu of their support for Khalistan.

On 23rd September, it was reported that the SFJ had attempted to capitalize on the ongoing protests by farmers and had declared that it would distribute $1 million among farmers who had defaulted on agricultural loans.

“From October 1 to October 8, any farmer — irrespective of his faith — can register 25 votes for the Khalistan Referendum 2020 and get a grant of Rs 5,000 as assistance to repay their agricultural loans,” SJF said. The security agencies have since received inputs on the latest offer by SFJ.

Earlier in September itself, the banned pro-Khalistani group Sikhs for Justice (SFJ) had announced a door-to-door campaign for registration of voters supporting its separatist agenda called ‘Referendum 2020’.

The anti-terrorist agencies had then alerted the law-enforcement agencies in the states after the announcement. However, the Punjab government led by the Congress seems to have taken the Khalistan threat lightly resulting in Khalistan groups taking advantage of current farmer protests.

Interestingly, while all of this was happened, the farmers protest was started in the same month of September. Now, pro-Khalistan, pro-Pakistan and pro-Imran Khan slogans have been raised during the farmers’ protest.

Netizens have noticed the video running as an advertisement on YouTube that is against the Google Advertiser Policies. As per Google’s policy, “Ads that potentially profit from or exploit a sensitive event with significant social, cultural, or political impact, such as civil emergencies, natural disasters, public health emergencies, terrorism and related activities, conflict, or mass acts of violence” are not allowed.

1n Early this morning (3.30AM) I opened my @youtube and get – a full on paid Khalistan advertisement advocating secession from India. I’m wondering what @YouTubeIndia is doing raising revenue from Khalistanis. Cc @AmitShah @HMOIndia @PrakashJavdekar @GoI_MeitY @DelhiPolice pic.twitter.com/oT4a9Myshb

Also, under Dangerous or derogatory content, Google has clearly stated that “content made by or in support of terrorist groups” is not allowed as an advertisement on any platform, including YouTube. Sikhs For Justice is an unlawful organization under the UAPA, 1967. In 2019, the Ministry of Home Affairs had banned SFJ for its anti-national activities. In July this year, the government of India had blocked 40 websites associated with the organization.

While YouTube has shown a propensity to ban channels for far less, it has inexplicably allowed for this terrorist message to be advertised on its platform with impunity. Seemingly, YouTube has decided that policies do not apply to the wicked.

The law has nothing to do with the land

These extremists are spreading rumors that the recently passed laws will take away farmers’ lands. Deep Sidhu, the Khalistani supporter actor-turned-leader, was also heard making such baseless claims. In reality, the laws give protection to the farmers in several ways from getting mistreated by private companies or traders. As per the reports, some farmers have already benefitted from the new laws as it helped them extract delayed payments from the traders.