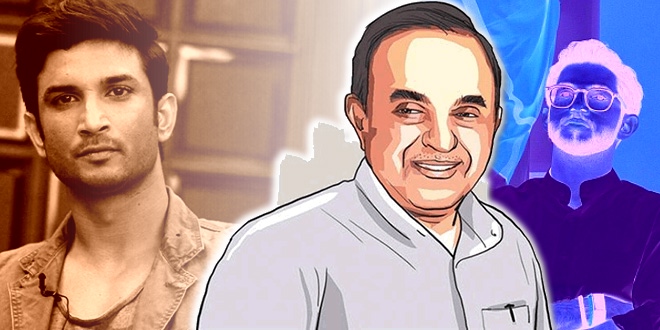 He may have flings with actresses, but is not a murderer: Subramanian Swamy says Aditya Thackeray has nothing to do with Sushant Singh Rajput’s death

“Anyone else with some decency, some educational background, and some sense of morality gets eliminated, does not get roles or gets killed in Bollywood. This is something we cannot accept in a democratic country like ours.” said Dr. Subramanian Swamy.

Subramanian Swamy is taking particular interest in Sushant Singh Rajput case. While talking in a live Q&A session with “Virat Hindustan Sangam”, on 2nd August, he alleged that with the evidence he has collected, it is evident that someone is trying to scare the CM [Uddhav Thackeray]. He added, “that someone is trying to drag his son’s (Aditya Thackeray) name, but I can tell you from whatever material I have, his son may be having flings with the actresses, but he has nothing to do with Sushant’s death”.

In the interview, he expressed his views on various topics including IPL, “mafia” in Bollywood and Sushant Singh Rajput’s death.

Swamy alleged that the person who is involved in the case is probably the son of somebody else who he is not in a position to name as he does not have enough evidence. He claimed that the evidence against that “son” who is so powerful that he can influence the system will be out soon.

He added, “in all and all we have a situation where politicians, gangsters and cinema stars who people respect, have formed a cartel which wants to ensure that the worst possible human beings become our actors and actresses. Anyone else with some decency, some educational background, and some sense of morality gets eliminated, does not get roles or gets killed. This is something we cannot accept in a democratic country like ours.”

Swamy said that he is happy to see the uprising among the general public about the case, especially after he announced that he would be taking an interest in the case. He added that he had designated Ishakaran Singh to assist in the court as well as the investigation as the man of law. He added that the government should not only ask the Central Bureau of Investigation (CBI) to take up the case but also involve National Investigation Agency (NIA) as there is a terrorist angle of Dawood as well.

The Q&A session happened before CBI was instructed by the union government to take up the case. When the Attorney General on 5th August informed the Supreme Court of India that Indian government has already instructed CBI to take up the case, Swamy tweeted and said, “The Centre has informed the SC that Sushant case has been handed over to CBI. Have I completed my commitment and free to go?”

The SC has been informed by the Centre that Sushant case has been handed over to CBI. Have I completed my commitment and free to go?

Actor Sushant Singh Rajput allegedly ended his life by suicide on 14th June 2020. Though the Mumbai police had declared it as a suicide, Sushant’s family claimed that it is not and a thorough investigation needs to b conducted. After over a month, his father KK Singh broke his silence and filed a case against Sushant’s girlfriend Rhea in Patna.

Bihar police formed a team of four officers who went to Mumbai for an investigation that apparently irked the Mumbai Police. Stating that Bihar police has no jurisdiction, Mumbai police denied providing any support to them. So much so, when IAS Vinay Tiwari reached Mumbai to lead the investigation, BMC forcefully sent him to quarantine that officially made it a turf war between Bihar and Maharashtra police departments. Maharashtra government also had an earful from the Supreme Court for sending IAS Tiwari to quarantine.

Ankita Lokhande, Sushant Singh Rajput’s ex-girlfriend and co-star from Pavitra Rishta helped Bihar police not only with the evidence against Rhea but also in the investigation when they arrived in Mumbai.

While hearing Rhea’s plea to shift the case to Mumbai, the Supreme Court rejected the request and allowed the central government to hand over the case to CBI. AG informed the Supreme Court that the CBI has already been instructed to take up the case, and as soon as CBI got the official letter from the ministry, they started the proceedings. The investigation is taking place from different angles, including Rhea’s involvement, nepotism, the role of Bollywood Mafia and money laundering, making it a high-profile yet confusing case that may not fade away soon.