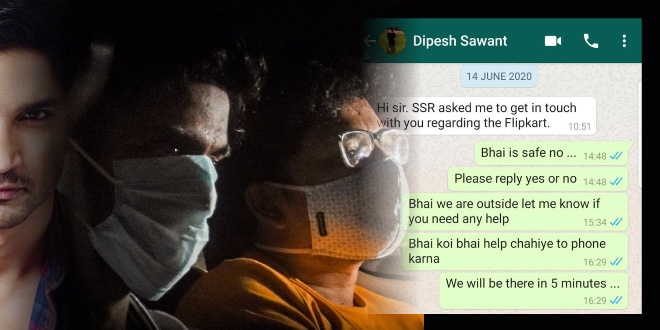 As per the reports, Sawant had spoken about a commercial deal with Sushant’s friend at a time when previous statements had claimed that they were knocking on the actor’s bedroom door.

Since the day Sushant Singh Rajput was found dead in his apartment, insiders and outsiders have tried to project it to be a case of death by suicide. His house manager Dipesh Sawant, who was among the 4 people who were present at Sushant Singh Rajput’s Bandra apartment on June 14- the day the actor was found dead in his bedroom, had also testified that the actor died by suicide.

Well, bringing a fresh new twist in Sushant’s death probe, Dipesh’s WhatsApp message to Sushant’s friend Kushal Zaveri on the morning of June 14 has now surfaced online, as reported by Republic TV. The testimonies and the Whatsapp chats accessed, somehow, do not add up.

As per the Republic report, Dipesh had messaged at 10:51 AM, just a few hours before Sushant passed away, in which he wrote to Kushal Zaveri: “SSR asked me to get in touch with you regarding the Flipkart”. This Whatsapp message, sent hours before the actor’s death punctures Cook Neeraj’s version that they (all the four present in the house at the time of the actor’s death) were frantically knocking on Sushant’s locked door at 10:30 am.

Kushal Zaveri reportedly happened to see the message only in the afternoon. However, by then, the news of Sushant’s demise was already all over media. Therefore, Kushal’s replies at 2:48 pm: “Bhai is safe no…Please reply Yes or No.” and then at 3: 34 pm: “Bhai we are outside, let me know if you need any help. Bhai ko koi help chahiye toh phone karna (Call me if you need any help). We will be there in 5 minutes”, seemed like it was more out of concern.

The report claims that a ‘depressed’ person about to commit suicide, as has been projected by many Bollywood personalities including Rhea Chakraborty, is unlikely to inquire about some financial deals.

Another Whatsapp chat dated June 9 between Sushant and Kushal Zaveri has also been accessed, which revealed that the e-commerce giant had got in touch with Sushant’s close friend because they were scouting for a brand endorsement deal and Sushant Singh Rajput was one of those they wanted talks with.

Since day one, all the four, namely, Dipesh Sawant, Siddharth Pithani, Neeraj Singh and Keshav, who were present in the flat when Sushant died have asserted that they were extremely worried about Sushant Singh Rajput not opening the bedroom door on June 14 morning. They had claimed how they had to call the key-maker to break open the door and how shaken they were to find the actor dead.