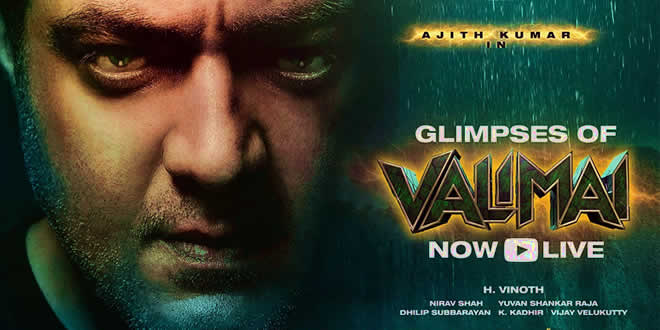 Arjun, an IPS officer sets out for a mission on hunting down illegal bikers involving in theft and murder.

This film marked the second collaboration between Ajith, Vinoth and Kapoor after Nerkonda Paarvai (2019). Vinoth, wrote the script in mid-2018 even before the production of the film began, as Ajith initially declined the script and work on it later. The film was launched on 18 October 2019, with the official title was announced and principal photography began during December 2019 in Hyderabad and was completed with February 2021, irrespective of the film’s production being disrupted due to the COVID-19 pandemic lockdown in India. Major portions of the film were shot across Chennai and Hyderabad, in addition to a few sequences in Russia.

The film was in the news due to the persuasion of fans to launch an update regarding the project, as a result, being listed one of “the most-anticipated Tamil film” according to the trade circuits. The film, which was originally intended for a theatrical release during 2020, was delayed as production came to halt due to the COVID-19 lockdown, and is now scheduled to release on 24 February, 2022.

Police officer Arjun (Ajith Kumar) lives with his mother and brothers in Vizag. He remains a bachelor. He can nab criminals quickly. He gets transferred to Vizag. When he starts investigating a suicide case, he understands that it must be linked to a larger crime. He and his colleague Sophia (Huma Qureshi) find that a series of chain snatching and bike theft cases in the city is linked to a drug mafia syndicate.

Using technology, the drug syndicate operates in the city by hiring unemployed youth as suppliers. They also find that the chief of the gang (Kartikeya) is running a website named Satan Slaves. As Arjun is on his mission, his family becomes a pawn in the game. How will Arjun nab the gang leader and save his family?

Tamil word ‘Valimai’ means power. In the film, all we get to see is the horsepower of bikes. Director H Vinoth, who earlier directed Karthi starrer ‘Khakee’ (2017), has a penchant for lengthy chase sequences. His “Khakee” had similar chases. In “Valimai”, the director mixes bike races, the dark web, and drug menace. But the director’s strength lies in capturing the action set pieces. They are spectacular, without a doubt.

But besides these action stunts, the film has an entirely formulaic setup. Add to that the unnecessary mother and brother sentiment derails the film completely. The prolonged sequences test patience.

First and foremost, the basic plot of a hero’s mission of finding the man behind the syndicate is so outdated line. Plus, the entire police system (seems to be inspired by Korean action dramas) and their operation are far away from reality. Many scenes defy the logic.

Ajith oozes charisma. He has performed some bike stunts on his own without dupe. Kartikeya Gummakonda gets a regular villain’s character. Huma Qureshi is relegated to a regular police officer.

Cinematography, slick editing, and action stunts are the backbone. The cinematographer captures Dileep Subbarayan’s stunning action stunts frenetically. The stunts and the camerawork are top-notch. But the writing is substandard. Music is weak.

‘Valimai’ is all style, no substance. Except for two terrific action episodes, the film offers nothing new. It turns out to be a formulaic action drama. The second half and lengthy runtime tests our patience