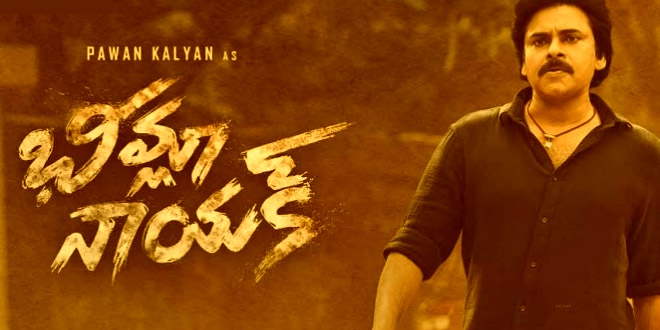 Things change when the egos of an upright police officer and a retired army havildar clash.

The film was officially announced in October 2020. Principal photography of the film commenced in January 2021 in Hyderabad. Filming was briefly halted due to the COVID-19 pandemic which was resumed in July 2021 and ended in February 2022. The film has music composed by S. Thaman with cinematography and editing performed by Ravi K. Chandran and Naveen Nooli respectively. The film is scheduled to be theatrically released on 25 February 2022.

In June 2020, Sithara Entertainments bought the Telugu remake rights of the Malayalam film Ayyappanum Koshiyum. Saagar K Chandra who earlier directed Appatlo Okadundevadu (2016) was signed to helm the project. Several actors including Ravi Teja, Nandamuri Balakrishna, and Rana Daggubati were approached for the lead role. In October 2020, the film was officially announced with Pawan Kalyan as one of the leads, in the role of a police officer originally played by Biju Menon. In December, Daggubati was confirmed the other lead, playing the role of Prithviraj Sukumaran from the original. The filming was officially launched with a pooja ceremony in Hyderabad. The film used a working title “Production No.12” and was colloquially referred as PSPK Rana Movie. The official title Bheemla Nayak was unveiled on 15 August 2021.

Writer-director Trivikram Srinivas was hired for the film’s screenplay and dialogues. S. Thaman was signed to compose the music with cinematography by Prasad Murella, editing by Naveen Nooli and production design handled by AS Prakash. In July 2021, Murella opted out of the project and cinematographer Ravi K. Chandran joined the film as the replacement.

Sai Pallavi was approached to play opposite Kalyan, while Aishwarya Rajesh was cast to be a pair with Daggubati. In March 2021, reports emerged that Pallavi may not join the project but director Saagar K Chandra refuted them by stating that she would join the production in April. However, Pallavi eventually opted out due to scheduling conflicts. In July, Nithya Menen was cast in place of Pallavi while Samuthirakani is signed to play a pivotal role. In September, Aishwarya left the project due to scheduling conflicts. Samyuktha Menon was confirmed to replace her in October. In December 2021, Brahmanandam confirmed through an interview that he was playing a role in the film.

Principal photography of the film began in January 2021. A 25-day schedule took place at an aluminium factory in Hyderabad. In March, action scenes featuring Kalyan and Daggubati were shot under the choreography of Dhilip Subbarayan. The second schedule of film began in April. Later, the shoot was halted due to the second wave of COVID-19 pandemic in India. 30% of the shoot is completed by June 2021, and a special set was constructed in Hyderabad for the next schedule. Filming resumed in July 2021. A new schedule began in December, filming took place at Madanpalle Yellamma Temple in Vikarabad. Final sequences, including a promotional song featuring Kalyan were shot in February 2022. The shoot was wrapped up on 17 February 2022, a week ahead of its scheduled release.

Bheemla Nayak is scheduled to be released on 25 February 2022. Earlier in July 2021, it was announced that the film would release on 12 January 2022, coinciding with the festival of Sankranti. However in December 2021, it was postponed to 25 February 2022 after requests by producers D. V. V. Danayya, Vamsi, and Dil Raju as their films RRR and Radhe Shyam were scheduled to release at the same time. Later in January 2022, the makers announced their intention to release the film either on 25 February or 1 April, whichever is conducive for a theatrical release due the prevailing COVID situation. In mid-February, the film was confirmed to be released theatrically on 25 February 2022 in Telugu along with the Hindi dubbed version.

When a rich brat and ex-army man Daniel Sekhar (Rana Daggubati), heading from Hyderabad to a village in Andhra Pradesh to attend a bachelor party via Nallamala forest, a group of excise and police officials stops his car at the check post. A constable manhandles Daniel, and he assaults the officers. Upright Bheemla Nayak (Pawan Kalyan), the sub-inspector of police, steps in and arrests Daniel.

Irritated by his attitude, Bheemla Nayak also writes FIR on Daniel. But he later realizes that Daniel is politically well-connected and informs the incident to his higher officer. The officer tells Bheemla Nayak to treat Daniel well as it was a petty case, and Nayak agrees.

Daniel is sent to remand for 14 days. In retaliation, Daniel releases a video of Bheemla serving alcohol in the police station which snowballs into a major clash.

Pawan Kalyan is famous for his temperament. He is also known to have deep respect for the culture and folk songs. The character of Bheemla Nayak in ‘Bheemla Nayak’ mirrors his persona. Although ‘Bheemla Nayak’ is the remake of a successful Malayalam movie ‘Ayyapanum Koshiyam’, the role seems to be intended for the Powerstar.

The basic plotline of ‘Ayyapanum Koshiyum’ is retained in this Telugu version. But the characterizations are tweaked. A flashback episode to the hero and interlinking the flashback to the climax portion are the major changes that have been done by screenplay and dialogue writer Trivikram.

The film’s setup is like any other masala action drama, but the treatment is different, more natural. Daniel Sekhar is not a bad person. Bheemla Nayak is a hero, but has flaws: he cannot control anger or let go of emotions. So, the drama dances on these two characters and builds situations out of them. There lies the beauty in the script.

The core of the conflict is a minor point. In a normal situation, police officers don’t file cases for possessing wine bottles in the car. But the guy was humiliated first. He then beat the officers, which leads to the first problem. Then, Rana’s ego doesn’t let him leave the issue there and pushes him to take revenge by releasing a video of Pawan Kalyan. One small incident leads to another, and the other. The screenplay is structured in a way that it slowly reveals layer by layer how ego, prestige, and masculinity create a ripple effect in a calm situation.

The original movie is also a commercial one. But it was not louder. ‘Ayyapanum Koshiyum’ has more texture, more socio-political layers. Biju Menon remains silent for the most part. But the Telugu version is even more commercialized as it has shorter by 30 minutes, and racy. And ‘Bheemla Nayak’ also tries to elevate heroism.

The flashback episode in the second half is one such example. The dialogues mouthed by Pawan Kalyan at interval is another one. The characterization of Pawan Kalyan is also slightly different from the original played by Biju Menon.

However, unlike regular commercial movies, ‘Bheemla Nayak’ doesn’t have a romantic song or unnecessary songs. Except for one ‘Bheem Bheem Bheemla’ song, all other songs come in the background. Director Saagar Chandra and writer Trivikram have made a fine balance of sticking to the original plot and paying service to Pawan Kalyan’s image.

This balance is what made the difference. The writing in the final act, especially the climax part, looks overt commercialization, though.

As the film is mainly about a clash between Pawan Kalyan and Rana, the performances need to be strong and they get them right. Pawan Kalyan is perfect in the role of Nayak. He underplays his role in most scenes but also channelizes his power in the lodge fight scene and in some portions in the second half. The role is suited to his off-screen persona. Rana Daggubati as Daniel Sekhar is terrific. As a man with prestige, he does justice to the role.

Nithya Menen is good as always, despite a limited role. Samyuktha Menon is impressive in her maiden Telugu role. She plays an important role in the climax part, which doesn’t exist in the Malayalam version. Murali Sharma lends his experience to the role. Samuthirakani’s character is somewhat not treated well here. Rao Ramesh’s character is a sore point.

The music has played a vital part. Thaman’s songs and the background score have gelled perfectly with the theme. He has once again proved that he can give what fans want with his background score.

While staying true to the core of the original Malayalam plot, ‘Bheemla Nayak’ is a more commercialized version with racy narration. Pawan Kalyan’s intense act, the clash between Pawan and Rana, and the intense moments have made it an engaging watch. If we leave comparisons with the original aside, the battle of pride and self-esteem has fine moments here as well.