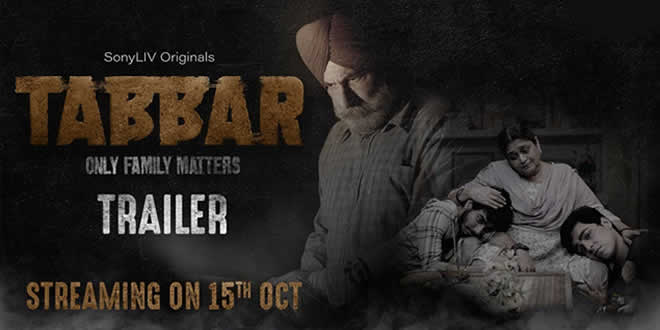 The show begins with the journey of a retired police constable who pushes the boundaries to save his family from the consequences of an unfortunate incident. With an ensemble star cast of Pawan Malhotra, Supriya Pathak, Gagan Arora, Paramvir Cheema, Kanwaljit Singh, and Ranvir Shorey, Tabbar promises a memorable thriller set in the heart of rural Punjab. The Series is streaming now exclusively only on Sony LIV.

Tabbar received positive responses from the viewers and the critics. The Times of India stated it to be an “Engrossing and intense family drama”. “The story keeps one hooked on to it,” said Dainik Jagran. ABP called it to be an “Enthralling thriller with amazing performances”.

MoneyControl stated, “the storytelling is so compelling that you will watch as the lies and blood keep mounting.”

KoiMoi said, “Pavan Malhotra-led thriller is as dark as it gets without a minute of ease.”

Prathyush Parasuraman of Firstpost wrote, The tension rarely slips, and the acting, aided by Sneha Khanwalkar’s moody melodies, ground you to a world you begin to care enough to be devastated for.

Rahul Desai of Film Companion wrote, “Tabbar works even when it doesn’t, for it reflects the disquiet of middle-Indian aspiration by focusing on the individualism – rather than systemic fury – of survival.”

A family living a simple life and dreaming big. A son aspiring to be an IPS officer. An ailing mother, financial distress… as things are about to take a turn for better, everything falls apart. Director Ajitpal Singh tells a riveting tale for which Punjab and its sorry state of affairs make for a compelling background.

Pavan Raj Malhotra’s acting prowess needs no introduction. As usual, he lifts this story by Harman Wadala and Sandeep Jain competently on his shoulders. While the heady concoction of Punjab politics and drug nexus is an oft-repeated story, the writers’ victory lies in how they weave an intriguing tale keeping the viewers on the edge.

Omkar Singh (Pavan Raj Malhotra) and Sargun (Supriya Pathak) make for a loving couple. Like any parents they would go to any length to protect their sons. Happy (Gagan Arora) and Tegi (Sahil Mehta) are two wayward boys – dreaming big and falling prey to the lure of quick money. One thing leads to another – and soon this tabbar (family) is caught in a series of crime. Onkar, an ex-cop, keeps a cool head as he manoeuvres each move. A god-fearing woman, Sargun crumbles under guilt. Supriya Pathak delivers a brilliant performance.

That Pavan and Supriya are the movers of this thriller – while his act is measured, Supriya’s exaggerated demeanour keeps true to the character she plays. There are moments of strife, and fright as this small family struggles to get out of the mess. Gagan and Sahil deliver fine performances. Ranvir Shorey and Ali Mughal lift up the game.

Post Scam 1992, this is another web series on Sony Liv that’s going to make a difference. Not just the performances, the twist and turns in the eight episodes that each begin with Baba Farid’s couplet keep one intrigued.

The look of bechargi on Pavan Malhotra’s face as a defeated father carrying the weight of two wayward sons touches one deep; as does the penultimate scene in which Supriya Pathak battles her guilt.

If there is a downer, it’s the striking similarity to another hit thriller Drishyam. As one moves from one murder to another, the makers use creative liberty to exploit the viewer’s sympathy for the family.

What makes Tabbar a remarkable web series is that it is a telling commentary on society today and its sorry state.

Post Scam 1992, this is another web series on Sony Liv that’s going to make a difference. Not just the performances, the twists and turns in the eight episodes that each begin with Baba Farid’s couplet keep one intrigued.

Pavan and Supriya are the movers of this thriller – while his act is measured, Supriya’s exaggerated demeanour keeps true to the character she plays.