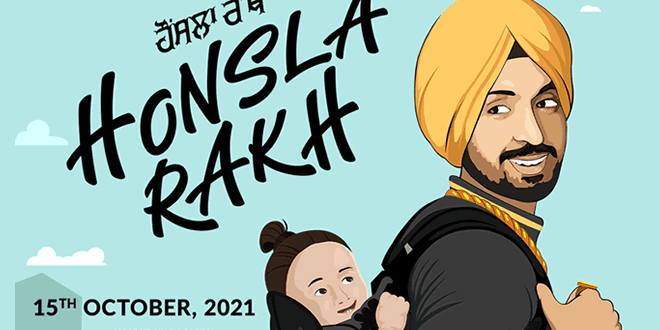 What happens when a lovable, rooted, desi, Punjabi young man, who’s a single father with a seven year old boy attempts to find love again, find a mom for his son, crosses paths with his ex who comes back into the city after a seven year gap? Honsla Rakh, starring Diljit Dosanjh, Sonam Bajwa, Shehnaaz Gill and Shinda Grewal is a romantic comedy set in Vancouver, Canada that has warmth at its center and deals with the emotional bonds between father and child, and love between men and women in modern times.

Honsla Rakh is an upcoming Indian Punjabi-language romantic comedy film directed by Amarjit Singh Saron starring Diljit Dosanjh, Sonam Bajwa, Shehnaaz Gill and Shinda Grewal, it marks the debut of Diljit Dosanjh as producer. The film is set up in Canada and its filming there was wrapped up on 1 April, 2021. It is scheduled to be released worldwide theatrically on 15 October 2021.

The film was announced by Diljit Dosanjh on 18 February 2021 with the lead cast Diljit Dosanjh, Sonam Bajwa, Shehnaaz Gill and Shinda Grewal, the son of actor Gippy Grewal. The film marks Dosanjh’s debut as a film producer.

Filming began in March 2021 in Vancouver, Canada and principal photography was wrapped on 1 April 2021 in Canada. A promotional song of the film which was scheduled to be shot on 15 September in London was postponed, as Shehnaaz Gill was mourning the death of her friend, TV actor Sidharth Shukla.

Honsla Rakh is scheduled for worldwide release on 15 October 2021 coinciding with Dussehra holidays in India.

Honsla Rakh is story of a single father and son, looking to complete their family. With Diljit Dosanjh playing the lead, this one is a laughter riot along with brief moments of emotion. Stories of single mothers is a sure-shot formula for tear-jerkers, but trust Pollywood’s leading Singh to bring his swag, funny antics with a wee bit of melodrama into the mix!

Yenkey Singh (Diljit) has a son, but his wife decides to pursue her dreams rather than get caught in ‘mommyhood’. Yenkey takes up the duty of raising his son while trying to find a new ‘mummy’ for him. And when he actually finds the right one, the purani mummy makes an entry and how!

Gippy Grewal’s son Shinda Grewal steps into son’s role with ease. Diljit and Shinda make for a cute father-son duo in matching beanies, sparring over Call of Duty. Shehnaaz Gill walks into Pollywood in high heels and straight into the viewers’ hearts. Her innocent, sweet and childish persona matches with the character, Sweety. Sonam Bajwa only cements her position as the leading lady of Punjabi entertainment industry. In this one, she plays a good-hearted yoga teacher. Diljit as a single dad impresses, like always. Due credit to Rakesh Dhawan for weaving his amiable character and sprinkling loads of laughter all through the narrative.

Ages-old subject with a gender spin is trending in the current times, Cinderella (2021) being another example. The role reversal stirs up a different sort of emotion. The dresses donned by the leading ladies and even their ‘man’ is enviable, as are their fit physiques. A slice of Canadian-Punjabi life, coupled with short and witty dialogues score with the viewers, who have finally returned to cinemas. While the background score goes up and down keeping up with the moods of the script, the music at best is ordinary. Hopefully, this happy-go-lucky outing by director Amarjit Singh Saron opens the gates for scores of Punjabi films that have been awaiting release!