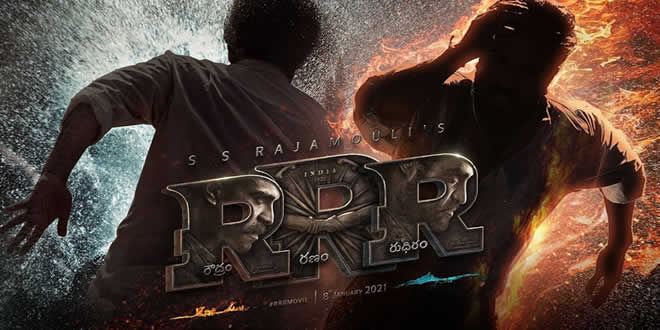 A fictitious story about two legendary revolutionaries and their journey away from home before they started fighting for their country in 1920’s.

Principal photography of the film commenced on 19 November 2018 in Hyderabad. The first schedule involved an action sequence shot at a set erected at Aluminium factory, Hyderabad. N. T. Rama Rao Jr., Ram Charan and S. S. Rajamouli have taken off to Vadodara on 29 March 2019 to continue with the shoot of the film. The film marks the South Indian cinema debut of actors Ajay Devgan and Alia Bhatt. Hollywood actors Ray Stevenson, Olivia Morris and Alison Doody play major roles.

Jr NTR and Ram Charan are dazzling, Bollywood has a lot to learn from this SS Rajamouli epic

Larger-than-life characters, high-octane action sequences, gravity defying shots that give you an adrenaline rush, world class VFX and sets mounted on a huge canvas – SS Rajamouli once again serves you the perfect visual spectacle with RRR. Starring Junior NTR and Ram Charan in the lead, the film is a wholesome entertainer and it only gets more grand with every scene.

It took Rajamouli five long years since Baahubali: The Conclusion (2017) to have his next big screen outing and when you watch RRR, you understand why wait was so long. His penchant for grandeur, perfection and attention to details comes alive in each frame of this multi-starrer. Keeping the emotional core of his story strong, he beautifully adorns it with superlative action, interesting origin stories and a tinge of humour, too. Even the most unrealistic visuals would impress you as the narrative and magnificent screenplay complements them well.

Set in 1920s in Delhi, RRR narrates the story of two individuals — Ramaraju (Ram Charan) and Bheem (Jr NTR) who become close friends without knowing each other’s truth or the intention behind their actions for or against the British kingdom. While the fierce, hotblooded and angry young cop Ramaraju is the ‘R’ in fire, the innocent, calm, charming yet beast-like Bheem is the ‘R’ in water. Ramaraju works for the British but has faced much humiliation for his skin colour. On the other hand, Bheem, belonging to Gond tribe, has come to Delhi to rescue the young girl called Malli, help captive by the British. What happens when Bheem and Ramaraju’s paths cross and they become friends? What happens when the actual truth is unearthed?

SS Rajamouli gets so much right in his latest film starring Jr NTR and Ram Charan.

It’s the camaraderie between Ram Charan and Jr NTR that wins you over. Both have an endearing screen presence and with their unique persona, bring so much more to their respective characters. While Ram Charan flexes his muscles, Jr NTR connects with you in the emotional and vulnerable scenes. Their bonding, chemistry in the song Nacho Nacho is the highlight of the film and gets you grooving in no time.

Sita is played by Alia Bhatt in an extended cameo but feels like she is forcefully fit into the narrative. She doesn’t bring much to the table other than a couple of scenes, and a dance sequence with the lead pair in the end credits, where she delivers with dedication. On the other hand, Ajay Devgn is a better-crafted character and holds your attention. Other supporting parts — King Scott (Ray Stevenson) Lady Scott (Alison Doody) are merciless as antagonists. Jennifer (Olivia Morris) is the benevolent Brit who helps Bheem in his purpose. She will remind you of Elizabeth from Lagaan who helped Bhuvan fight against the British rulers.

RRR is not just high on star quotient but also scores big with an overwhelming story. The film keeps you hooked from the word go. No time is wasted in the beginning to build up the plot and it’s only as the story unfolds, that we are familiarized with the backstories of characters. The movie’s intermission block narrates a story in itself and is such a powerful visual. I quite like how Rajamouli, throughout the film, maintains the reference to fire and water whenever Jr NTR and Ram Charan’s characters are shown. The fight sequences in particular are great and filmed in an elaborate way. Some slow motion shots just blow your mind and you want to cheer and applaud, looking at the cinematic marvel. Full credit here to KK Senthil Kumar for such spectacular cinematography. Despite its nearly 3-hour runtime, the film never looks dragged or boring for it has a tight screenplay and crisp editing by A Sreekar Prasad. Background score gives the film depth and adds to the scale of the scenes and characters.

To sum up, RRR is the perfect visual spectacle that you can only enjoy on the big screen and it is sure to leave you spellbound with its magnificent aura and scale. Not to miss, Jr NTR and Ram Charan win will your hearts with convincing performances.