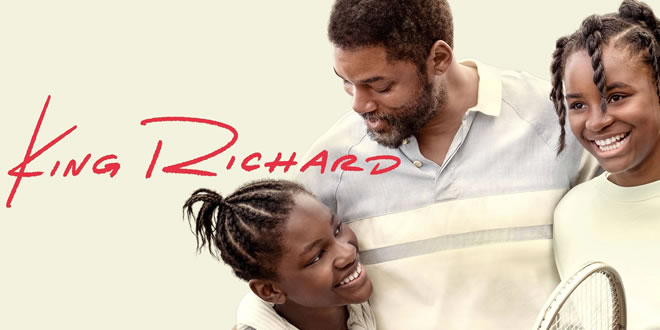 A look at how tennis superstars Venus and Serena Williams became who they are after the coaching from their father Richard Williams.

King Richard is a 2021 American biographical sports drama film directed by Reinaldo Marcus Green and written by Zach Baylin. It follows the life of Richard Williams, the father and coach of famed tennis players Venus and Serena Williams, who were executive producers of the film. It stars Will Smith in the title role, with Aunjanue Ellis, Saniyya Sidney, Demi Singleton, Tony Goldwyn, and Jon Bernthal.

It premiered at the 48th Telluride Film Festival on September 2, 2021, and was theatrically released on November 19, 2021, by Warner Bros. Pictures and on the HBO Max streaming service. It has grossed $38 million against a budget of $50 million and received positive reviews from critics, with praise for the screenplay and the performances of Smith, Ellis and Sidney.

STORY: An origin story of Tennis superstars Venus and Serena Williams (played by Saniyya Sidney and Demi Singleton), the film takes a long hard look at the wind beneath their wings — their ambitious and unapologetic father and former coach Richard Williams (played by Will Smith).

REVIEW: In his recent documentary, Tiger Woods described his conflicted relationship with his father and intensely monitored childhood. Greek sensation Tennis star Stefanos Tsitsipas is open about bearing the brunt of his father’s on-court coaching violations. At no point have these sportsmen denied their fathers’ unparalled role in their success and career but an undercurrent of friction has always been evident. The fathers have a single-minded approach to their child’s excellence and it comes at a price.

King Richard follows the complex mind of a father, who stops at nothing to realize the dream he sees for his daughters. A middle-aged man with no professional tennis training, Richard Williams overcame poverty and racism and coached his daughters himself. Confident and self-assured to the point of being cocky, though respected for his persistence, over the years he notoriously became known for his overbearing ways and overprotective nature. According to Serena, this biopic gets her father’s story right.

The making of a champion needs an army and Richard led that army while recruiting a few more nominal heads along the way. He didn’t play by the rules and never underestimated his faith in his daughters’ potential. He ignored the conventional path of having his daughters play junior tournaments first. With hardly a junior match under her belt in 1994, a 14-year-old Venus Williams came out and won her first professional match. Her father’s methods and decisions weren’t always right but his point was simple… aim higher and never hesitate to demand what you deserve. Not to forget, a big fat paycheck. His excessive professional and emotional investment in his daughters, at times even undue interference compels you to think about the shifting parent-child dynamics in life and career.

Billed as Oscar bait, the sports biopic is pretty predictable and falls a little short of being iconic in terms of the canvas. However, it does succeed in putting a controversial, shrewd and manipulative hero in the front; that’s far from being likeable… an honest depiction of a relentless father. You admire his stubborn pursuit of black dominance in a relatively privileged white sport (Tennis) as he bulldozed his way to success instead of tiptoeing, as was expected of him. The poor are expected to be docile, after all. Interestingly, the courage and sass on display, don’t whitewash the controversies. Revolving around the rising careers of Venus and Serena, two sisters on the cusp of stardom, the narrative also understands their parents’ turbulent equation, class disparities and social stigma, sibling rivalry and their humble upbringing.

The Tennis shots are captured well and infuse the thrill and tension required. Will Smith gets you teary-eyed once again as he portrays an iron-willed father, a hustler who struggles to overcome his own childhood abandonment and trauma. He gets the lisp, accent and mannerisms, everything on point. Watch this one for both Will Smith and Richard Williams.