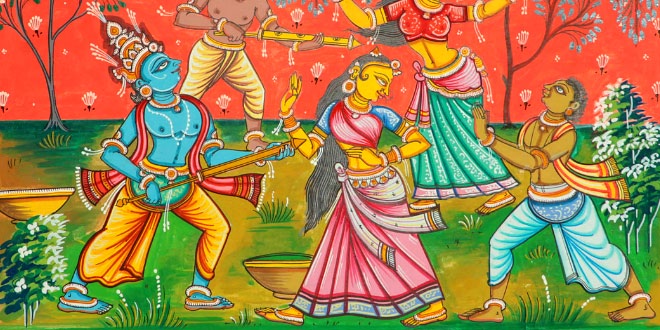 Why Holi is known as festival of colors?

In Vrindavan and Mathura (Where Lord Krishna grew up) the festival is celebrated for 16 days in remembrance of the divine love of Radha for Krishna. Krishna is believed to have complained to his mother (“Radha kyon gori, main kyon kala“) about his dark skin complexion and Radha’s fair. That’s when Krishna’s mother decided to apply colour to Radha’s face.

Almost all over the India (specifically North India) the festival of Colors is celebrated with great fanfare. People visits the neighborhoods and relatives and exchange colors with traditional Abir and Gulaal and at places it’s also been enjoyed with Water using Pichkaris.

Holi is once again turning streets, parks and other public places into explosions of music and colour as the celebrations roll on.

The Hindu holiday, commonly known as the Festival of Color, is a joyous two days of dancing, feasting and madness. But why do people celebrate Holi and where does its name come from?

Why is Holi celebrated?

Holi is a Hindu festival celebrating the triumph of good over evil, and the coming of spring.

It lasts for a night and a day, taking place on the last full moon of the Hindu lunar month Phalguna.

The first day is called Holika Dahan or Chhoti Holi and the second as Holi, Rangwali Holi, Dhuleti, Dhulandi, or Phagwah.

Though it is an ancient Hindu festival, it has become popular with non-Hindus in South Asia, Europe and North America, among other places.

In the Braj region around Mathura, north India, the festivities can last over a week and there’s a unique ritual where men go around with shields and women have the right to playfully beat them with sticks.

Why is Holi called the Festival of Colors?

This name for the festival derives from its main event, falling on the second day, Rangwali Holi.

Unlike the night before, when followers attend the ritual Holika bonfire and pray for evil to be burned off them, this event involves no religious ritual. It is an opportunity to have fun, pure and simple.

In a variety of public and private places, mayhem descends as people gather to begin a massive rainbow battle.

It’s basically a frenzy of covering anyone and everyone in the vicinity with colored powder and water by any means possible, including water balloons and water guns.

By the end of the day, everyone taking part looks like they’ve walked through a Skittles advert, which is why Holi is known as the Festival of Color.

Traditionally, the colors are derived from natural products like turmeric, kumkum, dhak and neem are used but synthetic colors are used more frequently nowadays.

What inspired the festival of Holi?

The festival originates from one main story about the arrogant King Hiranyakashipu, who asked to be worshiped as he believed he was invincible, and then punished his son Prahlada for remaining loyal to the god Vishnu instead.

When Prahlada’s evil aunt tried to trick him into sitting on a burning pyre, thereby getting rid of him for good, her magic cloak flew off her back and protected Prahlada instead, meaning she burned to death.

Meanwhile the god Vishnu appeared as a half human and half lion, took Hiranyakashipu away and destroyed him with his claws.