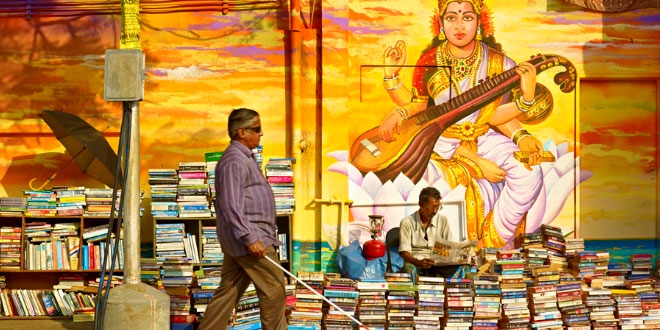 As ‘Diwali’ – the festival of light – is to Lakshmi, goddess of wealth and prosperity, and ‘Navratri’ is to Durga, goddess of power and valor, Vasant Panchami is to Saraswati, the goddess of knowledge and arts. This festival is celebrated every year on the 5th day or ‘Panchami’ of the bright fortnight of the lunar month of Magha, which falls during January-February. ‘Vasant’ comes from the word ‘spring’ as this festival heralds the beginning of the spring season.

It is believed that on this day goddess Saraswati was born. Hindus celebrate Vasant Panchami with great fervor in temples, homes and even schools and colleges. Saraswati’s favorite color white assumes special significance on this day. Statues of the goddess are dressed in white clothes and are worshiped by devotees adorning white garments. Saraswati is offered sweets which are given away as ‘prasad‘ to all people attending the ritual worship. There is also a custom of ancestor worship, known as ‘Pitri-Tarpan‘ in many parts of India during Vasant Panchami.

Vasant Panchami is the Hindu festival that highlights the coming of spring. This festival is usually celebrated in Magh, which is between the months of January and February in Gregorian calendar. It is celebrated in countries such as India.
Share