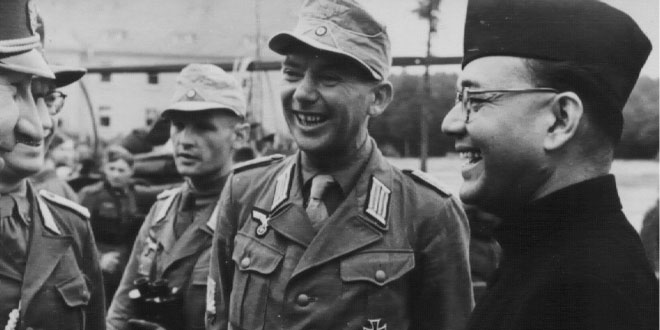 Why and when Britishers attempted to kill Bose?

The British told their agents to assassinate India’s independence war leader Subhash Chandra Bose in 1941, an Irish historian has claimed.

Eunan O’Halpin, who has written several books on British intelligence, says the order came after Bose sought support of the Axis powers in World War II.

British agents were told to intercept and kill Bose before he reached Germany via the Middle East, Mr O’Halpin says.

Bose is believed to have died in a plane crash in Taiwan in 1945.

Mr O’Halpin says that once they found Bose was planning to oust the British with active support of the Axis powers, British intelligence was given “clear orders” to assassinate him in 1941.

In a lecture in Calcutta, Mr O’Halpin cited a recently declassified intelligence document referring to a top-secret instruction to the Special Operations Executive (SOE) of British intelligence to murder Bose.

Mr O’Halpin says the British were initially puzzled about the whereabouts of Bose after his escape from Calcutta in January 1941.

“They thought he had gone to the Far East, but they soon intercepted Italian diplomatic communication and came to know Bose was in Kabul, planning to reach Germany through the Middle East,” said Mr O’Halpin.

“Two SOE operatives in Turkey were instructed by their headquarters in London to intercept Bose and kill him before he reached Germany,” the Irish professor, who teaches at Trinity College, Dublin, said.

Mr O’Halpin said the SOE operatives in Turkey failed to because Bose reached Germany through Central Asia and the Soviet Union. “Every time [the operatives] checked back, headquarters told them the orders were intact and Bose must be killed if found.”

Describing the decision as “extraordinary, unusual and rare”, Mr O’Halpin said the British took Bose “much more seriously than many thought”.

He added: “Historians working on the subject tell me the plan to liquidate Bose has few parallels. It appears to be a last desperate measure against someone who had thrown the Empire in complete panic.”

Other historians who have worked on Bose say this will add to the mystique of India’s most charismatic independence war figure.

“Bose would have reasons to compliment himself if he knew that the British were desperate enough to plan his assassination. That’s a measure of how seriously they took him,” says Calcutta historian, Lipi Ghosh.

In retrospect, she says, the British had correctly assessed the potential of Bose.

Sugata Bose, Gardiner professor of history at Harvard University and a grand-nephew of Bose. said: “Since he ultimately managed to swing the loyalty of the Indian soldiers to the national cause from the King Emperor, they had all the reasons to contemplate the worst.”

After 20 years in the Indian National Congress, Bose was elected its president but quit in disgust at Gandhi’s plans for non-violent struggle.

After reaching Germany he traveled to East Asia in a 90-day submarine journey to set up the Indian National Army from soldiers who had surrendered to Japan.

Bose’s army fought with the Japanese in the Imphal-Kohima campaign in 1944-1945.