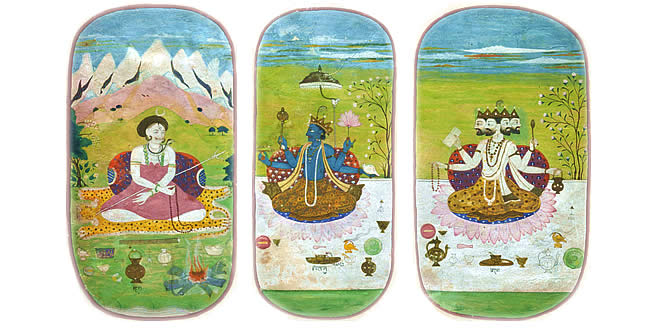 These Gods are worshiped by Hindus. They are very important to them, as they believe Brahma is the creator, Vishnu is the preserver and Shiva is the destroyer of the world. Hinduism is one the oldest religions, it began in India more than 5,000 years ago.

The Hindu triumvirate consists of three gods — Brahma, Vishnu and Shiva — who are responsible for the creation, upkeep and destruction of the world. Vishnu is the preserver of the universe, while Shiva’s role is to destroy it in order to re-create. Brahma’s job was creation of the world and all creatures. His name should not be confused with Brahman, who is the supreme God force present within all things. [Source: BBC]

Brahma is not worshiped and there are very few temples in his honor due to ‘mythological’ reasons. Vishnu (and the incarnations of Him, Rama and Krishna), Shiva (and his various forms), their wives, are very popular with numerous temples and followers. The wives of Brahma, Vishnu, and Shiva are Saraswati, Laxmi, and Parvati, respectively. Collectively, they are sometimes referred to as Divine mother (or Shakti). Two of Parvati’s fierce but very powerful forms are Durga and Kali.

Vinay Lal, a professor of history at UCLA (University of California, Los Angeles) writes: “Shiva is represented as the Destroyer, Brahma as the Creator: Vishnu holds the universe in balance, acting as the Preserver. However, the worship of Brahma is almost unknown in India, and Indian sectarian history and conflict resolves itself largely, though by no means exclusively, into a struggle between the adherents of Shiva, called Saivites, and the followers of Vishnu or Vaishnavites. The rival claims of the followers of Shiva and Vishnu are found in most Indian texts, stretching as far back as the Mahabharata, but there are also attempts to reconcile these claims with the argument that Shiva and Vishnu are in reality one. Thus, according to the Harivamsa, there is “no difference between Shiva who exists in the form of Vishnu, and Vishnu who exists in the form of Shiva.” [Source: Vinay Lal, professor of history, UCLA]

Steven M. Kossak and Edith W. Watts from The Metropolitan Museum of Art wrote: “Initially, Hinduism was centered around three male gods: Brahma, creator of the cosmos; Vishnu, preserver and protector of the universe; and Shiva, destroyer of the universe so that from the formless void it may be created again. Brahma has never had a large number of worshipers. Shiva, Vishnu, and the Great Goddess Devi (Mahadevi) in their myriad forms are the most widely worshiped Hindu gods. They are described in the Puranas, a group of texts formulated between A.D. 200 and 800.” [Source: Steven M. Kossak and Edith W. Watts, The Art of South, and Southeast Asia, The Metropolitan Museum of Art, New York <*>]

Previous Different Names of Shiva: Spirituality in Hinduism
Next What is Maha Shivaratri Festival?