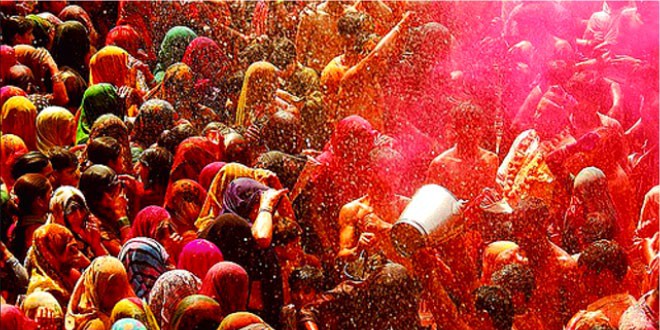 What is Tradition of Holi?

The colorful festival of Holi is celebrated by different names in this vast and culturally diverse country. The traditions followed for the festival varies a little and at times a lot as one moves from one state to other studying the various facets of the festival and getting behind the various colors of it.

Nowhere it is celebrated with so much charm and enthusiasm as in Mathura, Vrindavan, Barsana and Nandgaon – the places associated with the birth and childhood of Lord Krishna. At Barsana Holi assumes the name of Lathmar Holi. Here, women of Barsana give a tough time to men of Nandgaon as they come to play Holi with them. Women drag the unlucky captives, beat them, dress them in a female attire – yet all is in the spirit of Holi.

Women of Haryana, specifically the bhabhis too get an upper hand on the day as they get a social sanction to beat their devars and take a sweet revenge for all the mischief they have played on them. This revengeful tradition is called the Dulandi Holi.

The most enjoyable tradition of Holi, of course, apart from the play of colors is the tradition of breaking the pot. It is celebrated with much fan fair in the states of Maharashtra and Gujarat. Here a pot of buttermilk is hung high on the streets. Men form a huge human pyramid and one on the top breaks the pot with his head. All this while women keep singing Holi folk songs and throwing buckets and buckets of water. The tradition has its roots in the mischievous nature of Lord Krishna who was so fond of butter milk that he used to steal it from every accessible house in the village. To hide the butter from young Krishna, womenfolk used to hang it high. All in vain!

Holi is celebrated in the most dignified manner in the state of Bengal. At Vishwa Bharti University, founded by Rabindranath Tagore founded the tradition of celebrating Holi as ‘Basant Utsav’ or ‘Spring Festival’. Students decorate the campus with intricate rangolis and carry out prabhat pheris in the morning. Clad in a traditional attire young boys and girls sing songs composed by Gurudev and present an enchanting view to the onlookers who gather in large number here. In other parts of Bengal, Holi is celebrated as Dol Yatra where the idols of Radha and Krishna are placed on a decorated palanquin and taken out in a procession.

For Sikhs, Holi calls for the display of their physical strength and military prowess as they gather at Anandpur Sahib a day after Holi to celebrate Hola Mohalla. The tradition was started by the tenth and last guru of Sikh religion, Guru Gobind Singh ji and is being religiously carried forward.

In the north east, Manipuris celebrate the festival in a colorful manner for six continuous days. Here, the centuries old Yaosang Festival of Manipur amalgated with Holi with the introduction of Vaishnavism in the eighteenth century. The highlight of the festival here is a special Manipuri dance, called ‘Thabal Chongba’.

Well, there are many-many more ways in which Holi is celebrated. Different states, different cities and different villages have come out with their unique and innovative styles of playing Holi. It may not be possible to describe all of them at one place. What is noteworthy though is the fact that the spirit of Holi remains the same throughout. It is the festival which generates the spirit of brotherhood and bring people close – and this is what matters most than anything else.

What enhances the spirit of Holi though is the tradition of consuming the intoxicating bhang. It is generally consumed with thandai or as pakoras. People go high on it and enjoy the festival to the hilt. Other Holi delicacies include gujiya, mathri, malpua, puranpoli, dahi badas, etc. After a frenzied play of colors people love to gorge them up.

Previous Holika Dahan Celebration Images
Next What Rituals are Performed During Holi?