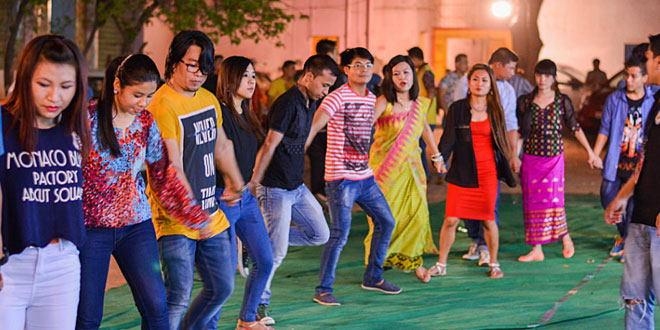 It is interesting to note how Holi is celebrated in Manipur (India). Here, the festivities continue for six days starting on the full moon day of Phalguna. It may also be noted that the traditional and the centuries old Yaosang festival of Manipur amalgamated with Holi with the introduction of Vaishnavism in the eighteenth century.

Besides, there is also a tradition of preparing a thatched hut of hay, twigs and sticks and then set ablaze. The next day boys make groups and play Holi with girls. Girls, in Manipur, are smart and extract money from the boys for playing colors with them.

Devotees, dress themselves in the traditional white and yellow turbans and sing devotional songs in the Krishna temples. They also play gulal with each other in front of the temple completely submerging themselves in the mirth associated with the festival.

On the last day of the festival, devotees take out procession towards the main Krishna temple, 3 km west of the state capital, Imphal. Here too, devotees perform cultural activities and celebrate.

A special Manipuri dance, called ‘Thabal Chongba‘ is also associated with this festival. Thabal, means moonlight and Chongba means dance. Though earlier only drum or dholak, was allowed to be used for this special dance, now modern musical instruments are also used. This dance is performed on all six-days in every locality and gives a chance to the young boys and girls to meet.

Previous Why Holi is known as festival of colors?
Next Holi in Himachal Pradesh: Festival Celebrations