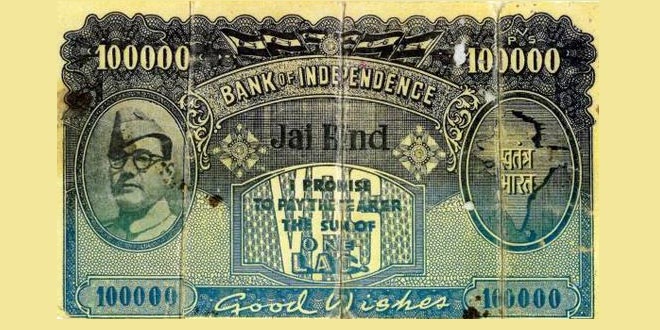 A novel thing on this great patriot surfaced in Madhya Pradesh on the eve of 113th Netaji Jayanti when a currency with a denomination of one lakh issued by Netaji Subhas Chandra Bose’s Bank of Independence was made public.

If the INA can conquer the British Army, this must have been be our currency.

The currency is similar to that of the present day Indian Rupee. Instead of Mohan Das Gandhi we can see the photograph of Rashtranayak Netaji on the left side of the currency and a map of unified Bharat (Akhant Bharat) with the inscription of Swantra Bharat in Hindi on the other.

In the middle, ‘Jai Hind’, the slogan of revolutionary patriots of INA and the entire nation, is inscribed in English language with the words ‘I promise to pay the bearer the sum of one Lac’ below it.

On the top of the currency, we can see the flags of Azad Hind Fauj and the inscription Bank of Independence.

The note was issued by a bank called Bank of Independence. Netaji established the Bank of Independence or Azad Hind Bank in 1944 in Rangoon to manage funds donated by the Indian community across the world for the liberation of Bharat Ram Kishore Dubey, a contractor in Madhya Pradesh found this currency in his grandfather’s Ramayana book in the 1980s.

His grandfather Praagilal was active in Netaji’s Azad Hind Fauj and passed away in 1958.

Praagilal provided his land for the Indian National Army and so Netaji rewarded him with this note assuring the amount in Independent Bharat.