Coral, which people often collect as decoration, is the hard, dried skeleton composed mainly of calcium produced by colonies of small animals very similar to anemones. The polyps of living coral live in tiny cups in the skeleton and are continually adding to its mass. The coral grows into a variety of shapes. Some species produce numerous branches and in other the polyps are arranged in twisting rows on a rounded mass.

Coral thrives in warm shallow water and it forms extensive reefs along tropical shores, particularly in the Pacific and Indian Oceans. The protection, the reefs provide make them ideal habitats and they support crowded communities of fishes, many kinds of invertebrates and seaweeds

Share
Previous What is confessionalism?
Next What is coral bleaching? 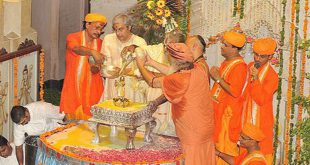 Janmashtami In Mathura: Janmashtami is celebrated throughout the country with immense zeal and fervor in …