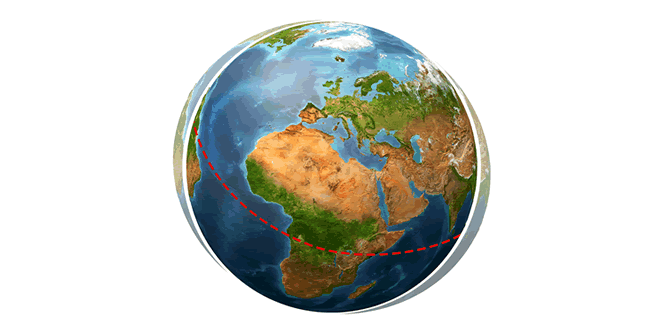 Is the earth perfectly round? No, it isn’t. The earth is in fact like a rubber ball which has been gently squashed at the top and bottom, so that it is widest at the equator. It also has four bulges which form rough corners. These are in Ireland, and near the countries of Peru, South Africa and New Guinea. Scientists call the earth’s shape an ‘oblate spheroid’.

While the Earth appears to be round when viewed from the vantage point of space, it is actually closer to an ellipsoid. However, even an ellipsoid does not adequately describe the Earth’s unique and ever-changing shape.

Our planet is pudgier at the equator than at the poles by about 70,000 feet. This is due to the centrifugal force created by the earth’s constant rotation. Mountains rising almost 30,000 feet and ocean trenches diving over 36,000 feet (compared to sea level) further distort the shape of the Earth. Sea level itself is even irregularly shaped. Slight variations in Earth’s gravity field cause permanent hills and valleys in the ocean’s surface of over 300 feet relative to an ellipsoid.

Additionally, the shape of the Earth is always changing. Sometimes this change is periodic, as is the case with daily tides that affect both the ocean and the crust; sometimes the change is slow and steady, as with the drift of tectonic plates or the rebound of the crust after a heavy sheet of ice has melted; and sometimes the shape of the planet changes in violent, episodic ways during events such as earthquakes, volcanic eruptions, or meteor strikes.

The National Geodetic Survey measures and monitors our ever-changing planet. Geodesy is the science of measuring and monitoring the size and shape of the Earth, including its gravity field, and determining the location of points on the Earth’s surface.

Share
Previous New Jersey State: US Encyclopedia For Students
Next How is the height of different places on earth measured from the sea level?