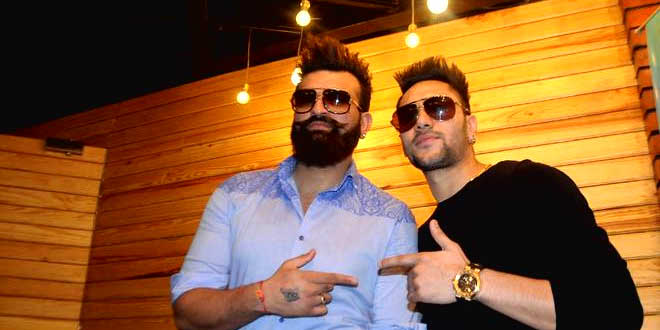 Huge solitaire studs in both ears, hair sticking up stylishly, kadak moochen and a groomed beard, as Navraj Hans walks in to announce his next single in Maverick, Piccadily Square on Tuesday, everyone present can’t help but notice. In tow, is his ‘veer’ Dil Sandhu, who has rapped for the song. A typical Punjabi number set in a wedding backdrop, and, guess we also heard the mention of a gun as Navraj hummed a few lines with a request not to record it, is called Angelina vs Pitbull! Now that Navraj is an Angelina fan and loves the famous American rapper too, all this duo is ready to divulge is that the song is going to be shot in Chandigarh and around. But apart from the song, the actor-singer bares it all.

His recent style is for the look test for an upcoming Bollywood project. What, when, where, why is not what he is allowed to tell but heartily Navraj shares how being stylish has been his priority right from his childhood. “You know on my fan page if I get one compliment for my song, there are two on my style,” shares the artiste who claims to be self- styled. “To do my hair like this takes me about 30-45 minutes,” says Navraj, who loves to mix and match high-end brands with street pick.

The name Angelina vs Pitbull invites curious queries, ‘Have you taken permission to use their names’ is one. “Yes, I texted Angelina and she wrote back, ‘No problem, Man’, he invokes laughter. “There is nothing controversial about it. We are just inviting them to come and enjoy our rich Punjab,” says Navraj before he takes an elderly gentleman aside and tells who Angelina and Pitbull are. Despite the name, the song is total desi, he promises.

There are plenty of projects in the pipeline but he is not ‘allowed’ to divulge till the official announcement – a Bollywood flick, an ambitious Punjabi film — but Navraj merrily talks about Canada Di Flight that releases this November and another Punjabi single – a Sufi track. “Canada Di Flight is with my brother Yuvraj and in my next single I am going full throttle in Sufi genre that I love.”

It’s impossible not to mention his famous father Hans Raj Hans whom the son labels as a very strict teacher and a doting dad. “Once we were doing a show in Chicago and I got distracted by someone or something. My tune went besura and there came a stinging slap right on the stage,” laughs Navraj, who shares that his famous father is ready to give a crore a month for learning but wouldn’t give any money to cut out an album. “I am proud that all my songs I have done are because of my capability and not because I have a strong back-up.” And, yes, he is trying to convince his dad on doing an album or film together and is hoping that something would materialise by the year end.

While singing remains his passion, having learnt it for about a decade, acting appeals to him too. A huge fan of Irrfan Khan and Naseeruddin Shah, Navraj is a stickler for gangster films. “I love Godfather and the films that fall in the league. But I am an ardent fan of Forrest Gump too.”Jalandhar boy Dil Sandhu is a rapper who is now based in Mumbai. All praises for Angelina vs Pitbull (the song is already recorded), Dil mentions a song like this has never been done in Punjabi music industry, seconds Vishal Dutt who is directing the video! Can’t wait…