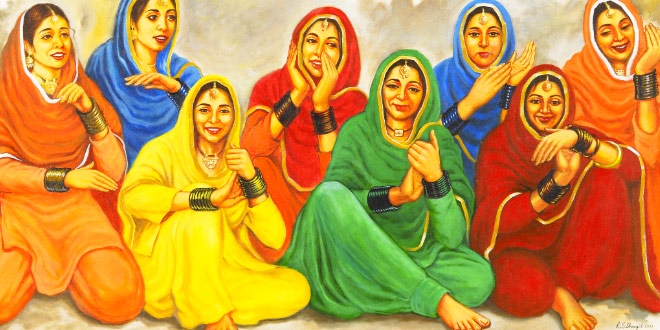 Ladies Sangeet is Passe – DJ is in

Our weddings may have become grander than life but the old marriage songs, associated with sangeet functions, have gone missing in the rising clamour of item numbers

It is the evening before the wedding day of their daughter in Gupta household. Everyone is super excited. Almost all relatives and friends from far and wide have already arrived to give their blessings to the new couple.

According to North Indian customs today is the sangeet evening, which everyone is looking forward to. It is just past noon and most of the women have already gone to the beauty parlour to get ready for the evening dedicated solely to song-and-dance. Fast forward a few hours, people have started thronging the venue for the sangeet. A handful of elderly ladies in the family are sitting in the corner with a dholki and a spoon for the beats and are singing some Punjabi wedding songs. This continues for not more than 15 minutes. Soon they vacate the dais, sit comfortably on the chairs in the audience, as the excited young generation is ready to set the stage on fire with their feet tapping to Bollywood beats. A DJ and his team will provide uninterrupted catchy music till late at night so that people can dance to their heart’s content.
A sangeet ceremony as the name suggests is all about dance and music. It has always been one of the most enjoyable ceremonies before the wedding. Traditionally, the family of the bride invites female relatives for a sangeet evening wherein all of them sing regional/folk songs on the theme of marriage and about bride’s preparation to enter a new phase of her life, peppered with some innocent bantering. With changing times this ceremony is being observed by the groom’s family as well. Not just that, the nature of the ceremony has also undergone a sea change from its traditional avatar.

Dholak, folk songs, traditional dances – all these have become a thing of past. One can find these happening as just a token in the whole ceremony now. Gone are the days when voices of two sisters — Surinder Kaur and Parkash Kaur reigned any Punjabi wedding scene. The songs sung by them were epitome of a true Punjabi culture and display of gaiety on this special occasion. Women in the family considered it a must-possess skill to sing these wedding songs and many used to be experts in dholak playing and accompanying spoon beats on the dholak.

Songs like “Kaala doria kunde naal, suhe ve cheere waaliye, latheh di chaadar, baajre da sitta, ve charkkha chaanan daa, shonkan mele di” and so on were quite common. These are nowhere to be heard these days. In all probability the new generation has never heard these songs either.

This changing phenomenon is not limited to just Punjab, all cultures are facing the onslaught of everything filmy in their weddings. For instance, no Rajasthani wedding can be imagined without music, which plays a huge role in the ceremony. There are many traditional songs for every function, sung by the women of the family and close friends. These songs have a typical folk feel and a lot of them are humorous as well. But times have changed, only a few women know these songs, says Trupti Rathi, a Rajasthani settled in Bangalore. She says, “While the functions are going on, a few songs are sung only as a token. But none of the younger lot understands or attempts to learn them. The focus has moved to DJ and dancing away the nights.” Traditional wedding songs like Aswari, Amba Badi, Badi ko Banaji, Bhabhiji Tharo Banado, Dudhalio Bano, Kesar Bana have unceremoniously faded into oblivion.

Yes, times have indeed changed. One cannot miss the change when one hears the background score in the weddings which has progressed (for better or for worse) from when it used to address a demure bride, a banno, a mulgi to item numbers and people gyrating to these.

If one thinks deeply, it feels as if we have reduced our own range in songs – one cannot make out whether the sound is coming from a wedding venue, a club, a birthday bash of a little child or a golden anniversary celebration of an elderly couple. The exclusivity of flavours that an occasion earlier warranted has completely gone.

Weddings may have grown much more in grandeur and opulence yet our very own Indian tadka is missing somewhere. One may argue that the festivities have not gone down at any cost but isn’t this too high a cost where the fragrance of one’s own roots and soil is lost in the flashlights of Bollywood and its music.