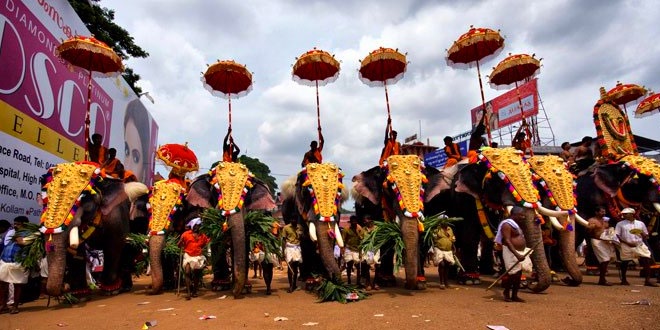 Another illustrious temple festival of south India is Uthralikavu Pooram celebrated in Sree Ruthira Mahakalikavu Temple, Parithipra, in Vadakkancherry, Thrissur District of north Kerala. The temple is dedicated to the mighty Goddess Kali.

The festival is held annually in the Malayalam month ‘Kumbham’ or February / March. The festivity continues for eight days.

The elephant processions in the gala are the main highlight all through day and night. Pooram day is celebrated on eighth and last day; procession of twenty one elephants caparisoned with beautiful ornaments along with Panchvadyam and Pandimelam is overwhelming.

These traditionally decorated elephants line up in the ground with mahouts sitting atop them and hold colourful parasols and swaying venchamarams (white tufts) and Aalavattams (peacock feather fans).

The cultural fare during the festival includes temple and folk art performances which provide magical spectacles to the viewers. The colorful events along with rituals and folk art performances in the evenings cast a spell to everyone. The glow of the traditional temple torches called Theevatti provides startling view. The festivities end with the spectacular all-night pooram pageant on the last day, the highlight of the festival. The pageant and festivities lasts until dawn and draws to a close with brilliant fireworks.