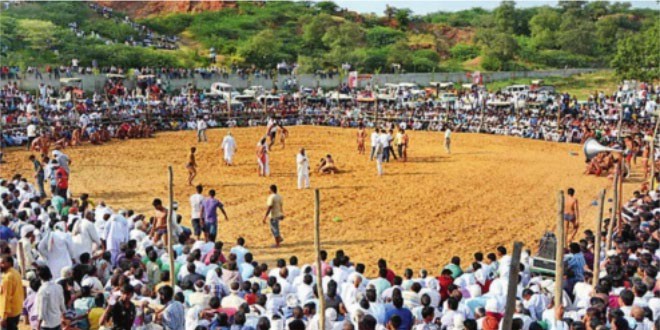 Not very far from the glitter and grunge of Gurgaon is a shrine that can trace its history back to the late 12th century. Every September, following the monsoon’s retreat, in the month of Bhadra, the shrine’s home -the village of Kasan -becomes the tableau of a fair thronged by many multitudes.

Kasan, a settlement like countless others on the plains of northern India, lies just behind IMT Manesar, the old in the embrace of the new. The “mela”, which has been held every year for the last 800 or so years, is centred round a temple that takes its name from a spiritual guru. The Shri Baba Bisa Bhakt Puranmal Mandir is dedicated to Baba Chauranginath, a holy man who lived in the 9th century , and to whom many miracles are attributed.

And the scene today is no different from what it would have been 100 years ago, or back in medieval India, or even to a time before that.

Through the ages, such a mela would have stalls selling trinkets, and playgrounds offering some sort of entertainment. Thousands upon thousands would gather from the villages around, and from afar, to experience the fun of the fair, or to pledge, again, their lives to the sacred.

The way to the shrine, a road that clambers up a hill, is a kaleidoscope of colour, crammed with men, women and children. There are those whose faith has brought them here, who seek nearness to the Baba’s spirit. Then there are those who flock for the fun. All trudging uphill, a sea of humanity seeking assurance, one way or the other.

Here, in Kasan, the piety is to be seen to be believed. There’s probably no other gathering like this in Haryana, with close to seven lakh people massing inside the temple compound over the four days. The wonder of it all is that there’s order amid the chaos. Without fuss, cooks in the kitchen rustle up meals for the bands of the devoted, while cops stand by to ensure discipline in the queues. A young woman craving for a child, or a sexagenarian desiring good health ­may be a family hoping to banish bad jinns from their lives ­ head to the temple to tie a red-coloured thread, or hang a white cloth (it is said that many wishes have come true here). And there must be something in the air, or in the water, in the abode of the Baba, for those who suffer from skin ailments have healed, miraculously, after a visit to the shrine.

One of the attractions of the four-day fair is the dirt wrestling contest, or kushti, which concluded on Sunday with the heavyweight bout (the winner of which got to take home more than Rs 2.5 lakh). In an area the size, roughly, of a handful of tennis courts, sweaty bodies wrestle for dominance. The crowds, vocal but appreciative, really get into the skirmishes taking place out in the middle, throwing advice and abuse.

Such is the pull of the Baba Puranmal Mandir that people trek, on foot, from Jhajjar, a distance of some 50 kilometres. But then, the power of faith knows no bounds.

Share
Previous Neb Sarai Village, New Delhi – Where each wall is a canvas
Next Annie Besant