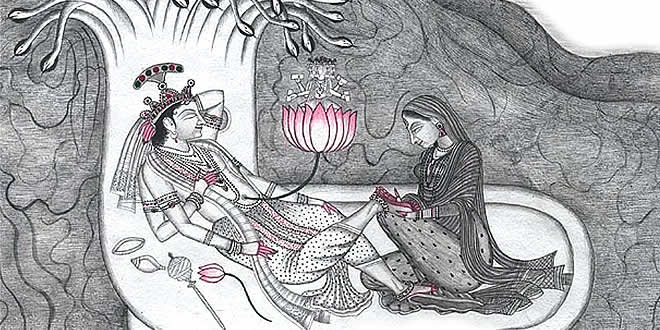 This aesthetic use of sesame seeds for religious purpose on the day has led to this Ekadashi being named as Shattila or Sat-tila-Ekadashi. The festival is usually celebrated in the Magh month on Ekadashi of Krishna Paksha.

Once there was a Brahmin woman who was a devotee of Lord Vishnu. She used to remain busy whole day worshiping Lord Vishnu. Any beggar or saint who used to visit her would return empty handed as the lady was least interested in giving any alms.

Lord Vishnu decided to test her devotion and visited the woman in disguise of a beggar. The woman was so busy with her Puja preparations that she failed to recognize Lord Vishnu. She simply shrugged away Lord Vishnu by offering him some pebbles and mud in the begging bowl.

On her death, the woman was taken to heaven in a gold and sapphire decked chariot. Despite all her riches in the heaven, the lady did not have anything to eat. She prayed to Lord Vishnu and asked him the reason for keeping her devoid of food.

Lord Vishnu thereafter told her about her deeds and karmas she had performed all through her life. The woman begged for forgiveness for all the mistakes she had committed throughout her life. Lord Vishnu asked her to observe the Shattila Ekadashi with devotion. The woman observed the same with a handful of sesame seeds and was blessed with a good life in all her births thereafter.

By celebrating Shattila Ekadashi with full religious devotion, a devotee can seek forgiveness for any kind of sin that they would have committed knowingly or unknowingly in the past. Donating til or sesame seeds is also considered auspicious on this occasion and devotees get liberated from any of their sins.

Any person who observes the festival with devotion is blessed throughout the life and attains Moksha after death. Offering mixture of water and sesame seeds to the dead in the family is considered auspicious on Shattila Ekadashi and provides solace to the divine souls too.

Devotees of Lord Vishnu start making preparations in advance for the occasion. On the morning of Shattila Ekadashi, it is considered auspicious to bathe in paste of til mixed in water. While bathing, the devotee needs to have religious thoughts in mind and should not let anger, lust or greed overtake their thoughts.

The fasting or Vrat should be observed with full religious devotion and the devotees need to be awake all night-long chanting Lord Vishnu’s name with devotion. Preparations made from cow dung, sesame seed and cotton wool should be offered in the Yagna organized to mark the celebrations.

This will bring peace and prosperity in the life of the devotee and ensure that they attain Moksha on their death.