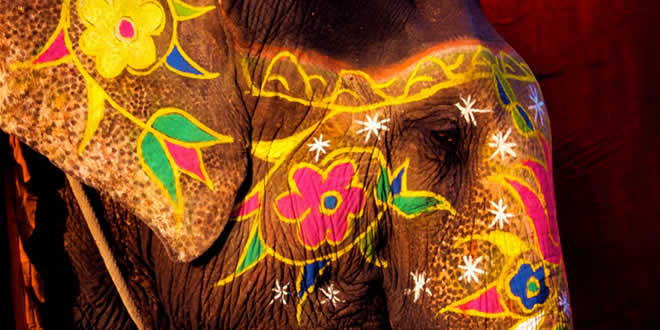 Elephant Festival — Elephants are regarded precious and majestic since “puranic” era. The supremacy of Elephant is also well illustrated in the Hindu Mythology. According to legends, at the time of ‘Samudra Manthan’ when demon and Gods were busy in “churning the ocean” (samudra manthan), Gods were fortunate to receive an elephant called “Airavata” which latter became the divine vehicle (vahana) of Indra. Since then Elephant has become a symbol of royalty in Indian culture and many festivals are also associated with it.

Out of several festivals celebrated with elephants, the one which is widely participated by Indians and foreign tourists is the Elephant Festival celebrated in Jaipur during Holi in Phalgun (March / April). This is an annual event held at Jaipur Chagan Stadium where people gather in large crowds to celebrate the occasion with much pump and gaiety.

Jaipur Elephant Festival, perhaps the only festival where Elephants are given prime importance. Here, as you would expect from the name of the Festival – Elephants are the centre of attraction. During the festival, Jaipur comes alive with elephants, dancers and musicians which draw visitors from all over the world. The elephants stride majestic-experience for everybody by parading their decorated trunks and tusks. And the most noticeable feature of this festival is that all the Elephants which take part in this festival are female Elephants.

The Elephant Festival begins with a procession of elephants painted and tastefully attired with expensive gems and embroidered velvets, followed by folk dancers who with their lively performance along with the program of Dhaph and Gair dance which projects the spirit of Holi, all this together put the mark on this occasion. The elephants greet the visitors, offer garlands to the guests and walk past the ramp before a jury of experts and tourists who select the best amongst them for the “Best decorated Elephant” Shield.

Elephant races and polo matches are special features. The tug of war between elephants and men is probably the most hilarious highlight of the festival. The unique “Gaj Shringar” exhibition displays everything connected with the elephant-ornaments, textiles (Jhoo), howdahs and carriages, paintings, medicines and food.

The visitors have an opportunity to mount the elephants and play Holi or polo with them. Participants dance with great vigor – the excitement rises to a crescendo. Along with the Elephants there are lancers on horses, chariots, camels, cannons, palanquins, etc which takes part in the festival.

Activities performed by the Elephants during Elephant Festival are:

The Rajput kings, treated elephants with special enthusiasm as they not only during War times but also during royal festivities use the best which is Nishan-ka-hathi (the flag carrier) to lead the procession. After the procession, King selects one elephant who entertain with their fights and other games in front of the royal guests including famous personalities of the British era and Maharajas of Indian dynasties. Latter, the flag carrying elephant rides up to Amber Palace – this tradition is carried on till today!

Previous How To Draw Elephant: Drawing for Students and Children
Next World Elephant Day: Elephant is the most exploited animal