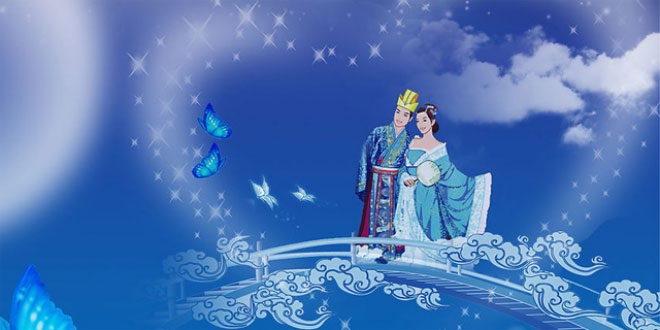 Chinese Valentine’s Day: Valentine’s Day, the annual tribute to romantic love, is fast approaching. Florists, card shops, and chocolate vendors are all doing a raging business as lovers rush to purchase tokens of their affection.

There are two legends surrounding the origins of Chinese Valentine’s Day. Both involve the position of the stars on the seventh day of the seventh month in the Chinese lunar calendar (August 13th in 2013).

According to the first legend (my favorite), the seven daughters of the Goddess of Heaven caught the eye of a Cowherd during one of their visits to earth. The daughters were bathing in a river and the Cowherd, Niu Lang, decided to have a bit of fun by running off with their clothing. It fell upon the prettiest daughter (who happened to be the seventh born), to ask him to return their clothes.

Of course, since Niu Lang had seen the daughter, Zhi Nu, naked, they had to be married. The couple lived happily for several years. Eventually however, the Goddess of Heaven became fed up with her daughter’s absence, and ordered her to return to heaven. However, the mother took pity on the couple and allowed them to be reunited once a year. Legend has it that on the seventh night of the seventh moon, magpies form a bridge with their wings for Zhi Nu to cross to meet her husband.

In the second story, Niu Lang and Zhi Nu were fairies living on opposite sides of the Milky Way. Feeling sorry for the two lonely sprites, the Jade Emperor of Heaven actively tried to bring them together. Unfortunately, he succeeded too well – Niu Lang and Zhi Nu became so enraptured with each other that they neglected their work. Annoyed, the Jade Emperor decreed that from that point on, the couple could only meet once a year – on the seventh night of the seventh moon.

Today, star gazers celebrate Qi Qiao Jie by gazing up at the star Vega, east of the Milky Way which represents Zhi Nu, and at the constellation Aquila, on the west side of the Milky Way, where Niu Lang waits for his lover to join him.

Other common names for the festival are the Seven Sisters Festival or the Festival of the Double Sevens.