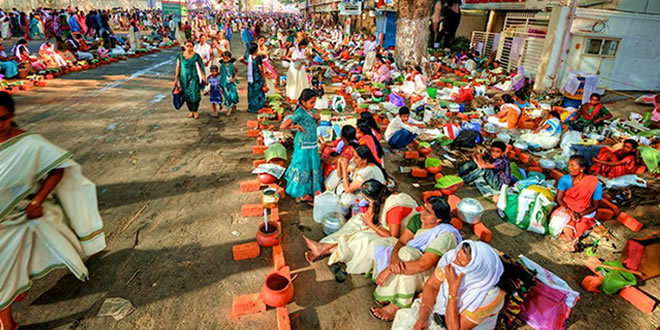 ‘Attukal Pongala’ is the most important festival of Attukal Bhagavathy Temple. The offering of Ponkala is a very special temple practice in the southern part of Kerala. The ten-day- long celebration commences in the Malayalam month of Makaram-Kumbham (February – March) on the Karthika star. Ponkala ceremony is on the auspicious day of Pooram star which coincides with full moon.

The festival commences with the musical rendering of the story of the Goddess (Kannaki Charitam) during the “Kappukettu ceremony”. The story invokes the presence of Kodungallur Bhagavathy and the slaying of the Pandyan King. The song will continue for all the nine days preceding Ponkala. The event of the Goddess annihilating the Pandyan King is accompanied by much sound and fury of the temple drums and “Vaykurava” by devotees, immediately followed by the lighting of the hearths for the preparation of the offering for the Goddess.

This festival commemorates the victory of Good over Evil, by the slaying of Pandyan King. Throughout the festival an atmosphere of celebration and festivity prevails and there are the solemn observances such as regular conduct of Bhajans, musical concerts, ballets depicting folk and temple arts etc. in the temple premises. This is symbolic of the philosophy that human and divine affairs are inter-woven so minutely in all its disquisitions. Processions of colorful floats of the deity from all around, carried with pomp and devotion by the devotees congregating in the temple premises provides a pleasing experience.

Attukal Pongala: As per Wikipedia

Attukal Pongala is a 10-day religious festival celebrated at the Attukal Bhagavathy Temple in Thiruvananthapuram in the Indian state of Kerala. On the ninth day there is a huge gathering of millions of women on the temple surroundings. These women prepare a divine food made of rice in earthen pots and offer it to the Attukal Amma (Goddess of the Temple). The pongala preparation starts with the ritual called ‘Aduppuvettu’. This is the lighting of the pongala hearth (called Pandarayaduppu) placed inside the temple by the chief priest. This is the earliest Pongala festival in Kerala. The festival is marked as the largest annual gathering of women by the Guinness World Records. The ceremony was set up in Guinness Book of World Records on February 23, 1997, when 1.5 million women participated in Pongala. In 2009, a new Guinness World Records celebrated 2.5 million attendance. This temple is also known as the Sabarimala for women.

Though it is a Hindu festival, many Christian women in Kerala also offers Pongala to the Goddess.

The Attukal Pongala was held on March 9, 2020. The Attukal Pongala event started at 10.20 am and ends at 2.10 pm with the traditional Nivedyam. Thousands of women participated despite the high alert from the state government against large gatherings due to the COVID-19 pandemic.