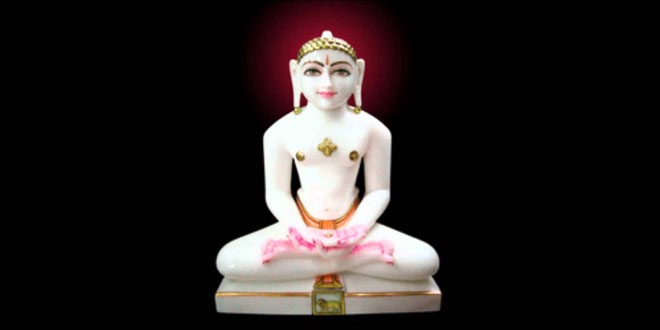 Mahavir Jayanti Greetings For Students: Mahavir Jayanti, also known as Mahavir Janma Kalyanak, is the most important religious holiday for Jains. It celebrates the birth of Mahavira, twenty fourth and the last Tirthankara (Teaching God) of the present time cycle. On the Gregorian calendar, the holiday occurs either in March or April. Here we have collection of Lord Mahavira greeting cards, share with your Facebook, WhatsApp, Instagram friends.

Mahavira, also known as Vardhamana, was the 24th tirthankara (ford-maker) who revived Jainism. He expounded the spiritual, philosophical and ethical teachings of the previous tirathankaras from the remote pre-Vedic era. In the Jain tradition, it is believed that Mahavira was born in the early part of the 6th century BC into a royal Kshatriya family in present-day Bihar, India. He abandoned all worldly possessions at the age of 30 and left home in pursuit of spiritual awakening, becoming an ascetic. Mahavira practiced intense meditation and severe austerities for 12 years, after which he is believed to have attained Kevala Jnana (omniscience). He preached for 30 years and is believed by Jains to have attained moksha in the 6th century BC, although the year varies by sect. Scholars such as Karl Potter consider his biography uncertain; some suggest that he lived in the 5th century BC, contemporaneously with the Buddha. Mahavira attained nirvana at the age of 72, and his body was cremated.