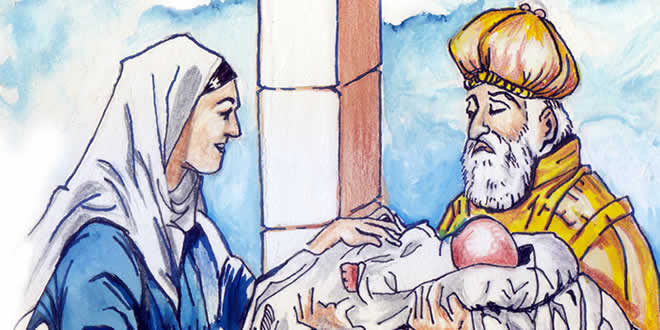 Stories from the Bible, Zacharias was priest and served at the Temple in Jerusalem…

Zacharias and Elizabeth: Story from Bible

Elizabeth, Mary’s cousin, was married to Zacharias. Zacharias was priest and served at the Temple in Jerusalem. Elizabeth and Zacharias had no children. Because they were old, they did not expect to have any.

“Don’t be afraid, Zacharias,” the angel said. “Your prayers have been heard. You and Elizabeth will have a son. You will call him John.”

Zacharias did not believe the message from God. The angel said: “Zacharias, because you do not believe, you will not be able to talk until the baby is born.”

It was after this that Mary came to see Elizabeth. Mary was excited and anxious to tell Elizabeth her news. When Mary saw Elizabeth, the Holy Spirit told Elizabeth the wonderful news that Mary was to be the mother of the Son of God. Elizabeth said to Mary, “Cousin, you are indeed blessed among women.”

Then Elizabeth told Mary that she, too, was going to have son whose name would be John. She told Mary that the angel said John would one day lead the people of Israel.

Mary was happy to hear Elizabeth’s news. She and Elizabeth prayed together and thanked God for all that had happened. Mary stayed with Elizabeth for about three months. It was a happy time for them and often they would talk of the great happiness that would be theirs when their sons were born.

Later, when Elizabeth’s son was born all her friends and family were happy and rejoiced with her. But Zacharias still could not speak. When the baby was eight days old, Elizabeth and Zacharias were ready to give him a name and present him to God.

“Call him Zacharias after his father,” some said.

“No, he is to be called John,” Elizabeth said.

“There is no one in your family named John,” the friends said.

This John became one of God’s prophets, John the Baptist.

~ “Zacharias and Elizabeth” Story from Bible: Illustration by ~ ‘Amarjeet Malik‘