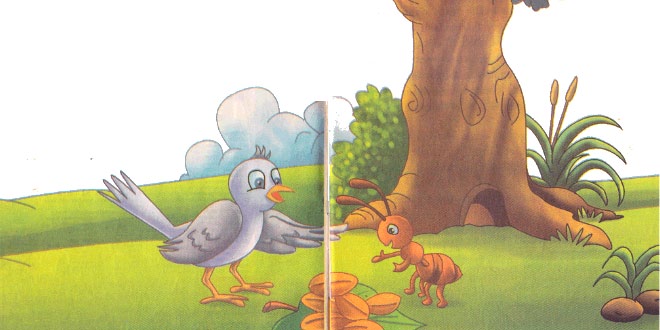 Chinky Sparrow used to live with its children in a beautiful nest, on a huge tree in Champakvan. She goes out every morning to peck grains in order to feed her young ones.

Ila Ant lived at the root of the banyan tree. One day, Ila was sick. She could not even walk properly.

Chinky Sparrow asked Ant “Sister, it seems that you are not well today.”

Ila Ant answered, “I am suffering from high fever for two days. I could not eat anything there is no food left in the house.”

Chinky said, “Do not worry, sister. I will come back in a minute.”

Chinky straight away went to her nest and bought some grains for her. Ant thanked Chinky for caring about her so much. Ila had her launch and then went to her house to take rest for some time. She recovered from her illness in the next two days. Soon, Ila and Chinky became good friends. Days after days went by.

One day when Chinky Sparrow went to peck grains, Lobhi Vixen noticed her. Lobhi got tempted as she heard sounds of the young sparrows and she wished to kill the young ones and eat them all.

She went near the tree silently. She thought about throwing stones at the young sparrows. But Ila understood the whole scheme as soon as she noticed Lobhi standing near those little sparrows.

As soon as Lobhi Fox picked up a stone to throw on the little ones, Ila got scared and she started thought about some way through which she could save her best friend’s family somehow. She quietly went near Lobhi Vixen’s foot and bit her foot badly. Lobhi screamed out loud and the stone fell down from her hand.

All the birds started shouting after they heard Lobhi screaming. Lobhi could not understand what happened to her. She got frightened and ran into the jungle speedily.

Chinky Sparrow also returned to her nest as soon as she heard the noise. She felt calmed as to find her young ones safe and healthy.

Ila Ant told abut the whole incident to Chinky Sparrow. Tears rolled down Chinky’s cheeks as soon as she heard about this terrible incident.

She thanked Ila and said, “Dear sister, you have saved my kids.”

Ila Ant replied, “Sister, it is my duty. We all should help each other at the time of trouble.”