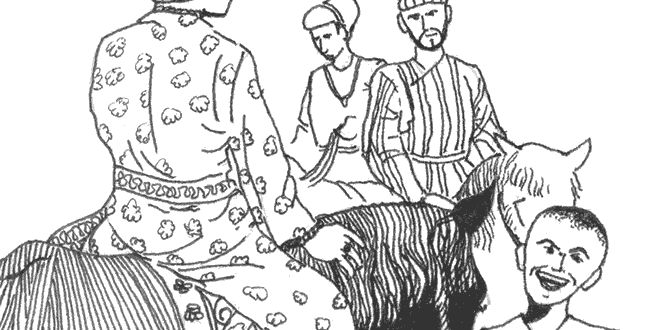 Emperor Akbar was fond of hunting, even as a child he would miss his lessons and his tutors in order to go riding and hunting. And as a result he grew up into a better rider and fearless hunter. One day chasing a tiger, Akbar and few brave soldiers had gone a long distance from the royal capital at Agra, and as evening came, they realized that they were lost. They were hot, dusty and tired, riding slowly they reached a place where three roads met. Ah! at last, we see the road”, said the emperor, he asked his courtiers “Which way shall we go? Which road goes to Agra?”

Just then a young man came walking down one of the roads. Glad, to see someone on the road, the courtiers called him and ordered him to come forward. He did so, looking up at the richly-dressed hunters with bright, curious eyes. “Tell us, which road goes to Agra?” said the emperor Akbar.

The young man began to smile. “Huzoor, everybody knows that roads can not move. How can this road go to Agra, or go anywhere else?” he said, and he chuckled delightedly at his own joke.

There was absolutely silence. The emperor stared down at the youth. His soldiers held their breath. They knew the emperor’s temper. Not one of them dared to say a single word. “People travel”, the boy went on, not seeming to notice the ominous silence, “roads, don’t do they?”

“No, they don’t,” the emperor cried suddenly and began to laugh. Nervously, his soldiers began to laugh too. The youth ignored them and continued to look at the emperor with twinkling eyes. “What’s your name?” emperor asked the youth. “Mahesh Das”, he said, he replied. “And what is your name Hazoor?”

The emperor pulled off an enormous emerald ring which he wore on his hand. leaning down, he gave it to the young man.

“You are speaking to Akbar, emperor of Hindustan“, he said. “We need fearless young men such as you at our court, Mahesh Das. Bring this ring with you when you come, and I shall recognize and remember you. And now, show us the way in order to go to Agra.”

Mahesh Das bowed low and pointed towards the capital. The emperor turned his horse and galloped away, followed by his courtiers. Mahesh Das watched until a bend in the road hid them from his sight.