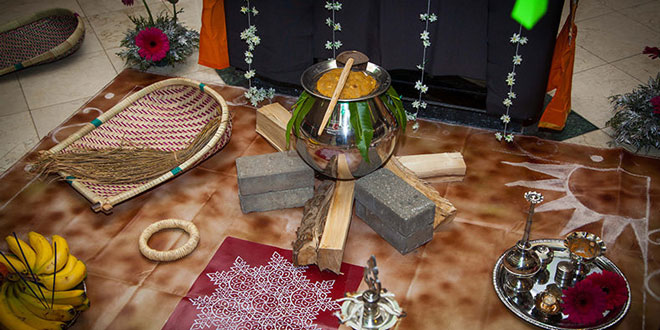 Pongal Customs: The word Pongal, in both Telugu and Tamil, signifies the boiling over of the rice in the cooking pot. Though little is known about the origin of Pongal, it is known to a Dravidian harvest festival that has survived for ages. Pongal also marks the beginning of a New Year and is the day to praise and thank God with full devotion, faith and sincerity. The festival covers all living beings, including humans, cattle and birds and crops. Falling just after the winter solstice and a bountiful harvest, Pongal marks the season of celebration and joyous activities and is celebrated continuously for four days.

The first day of Pongal, known as ‘Bhogi Pongal’, is a day for family gathering and is dedicated to Lord Indra, the King of the deities and God of the Clouds and Rains. Offerings are made to please him, so that he blesses the devotees with the plentiful harvest. Pongal also signifies the beginning of a New Year, according to the Malayalam calendar. A huge bonfire is lit at home and kept burning throughout the night. Boys beat little buffalo-hide drums, known as ‘Bhogi Kottus’, whiel lighting the fire and make merry. The houses are then cleaned till they shine and decorated with Kolams, using rice flour. Yellow pumpkin flowers are set in cow-dung balls, in the middle of these designs. The harvest of rice, turmeric and sugarcane is brought in for the next day.

The second day of Pongal, known as ‘Surya Pongal’, is dedicated to the Sun God. Since the word ‘Ponga’ means ‘to boil’, representing plentiful and excess yield, a special dish is cooked on this day, in a new mud-pot that comes in innovative shapes and have artistic designs on them, called ‘Pongapani’. The special dish is called ‘Sarkkarai Pongal’ and is offered to Sun God, with sugarcane sticks. A colorful sugarcane market is also set up on this day. It is said that Lord Sundareshwar performed a miracle in the Madurai temple, on this day, and breathed life into a stone elephant that ate sugarcanes. One can see the depiction of the event in the Meenakshi temple.

The third day, known as ‘Mattu Pongal’, is dedicated to the cattle and other domestic animals. Shepherds pay thanks to their cows and bulls, wash them, paint their horns and cover them with shining metal caps. They are fed ‘pongal’ and tinkling bells are tied around their neck. Cattle races are also conducted and in the game called ‘Manji Virattu’, groups of young men chase running bulls. Bull fights called ‘Jallikattu’ are also arranged at some places, where young men have to lay their hands on the money bags tied to the horns of ferocious bulls single-handedly. Lord Ganesha and Goddess Parvati are also worshiped on this day. At some places, this day is celebrated as Kanu Pongal, when girls feed colored balls of cooked rice to birds and crows and pray for their brothers’ happiness.

The fourth day of the festival is celebrated as Kaanum Pongal. Kaanum Pongal is known as Karinaal in some parts of Tamil Nadu. Sun God is worshiped on the day. Along with the prasads made for the festival, the deity is also offered Sarkarai Pongal, a sweet dish prepared by using rice and jaggery. In addition to this, sugarcane is also offered to the lord. Thereafter, the Sarkarai Pongal, prasad and sugar cane are offered to the people, who have gathered while performing the rituals. People in Tamil Nadu consider Kaanum Pongal as an auspicious day to visit their long lost friends and far away relatives. The performance of folk dances and folk songs on Kaanum Pongal is part of the celebrations.