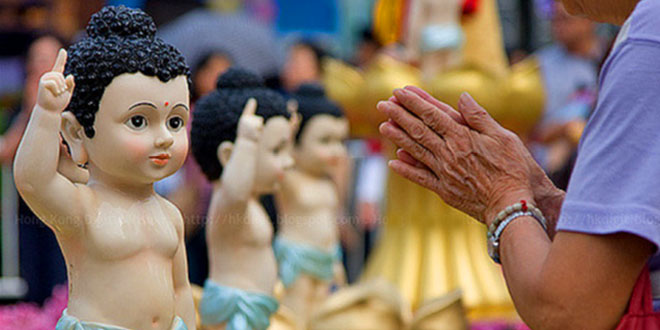 Buddha was a real historical character at the same time he was a mythical man of legend. Buddhist mythology is replete with legends relating to his birth. It is believed that Buddha had come into being after through a series of birth and death. In some he was reborn as human and in some, as an animal. And that Buddha is the final phase in which he achieved the ultimate Nirvana, the parinirvana. According to a Tibetan belief, that he would be reborn, had been prophesied many years before Gautam Buddha was born. 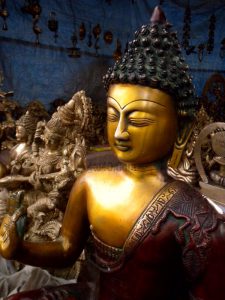 He was born in 544 B.C. in a garden at Lumbini, of Northern India, now Nepal. He was the son of Suddhadhan, the king of Lumbini, and was an heir to the throne.

Like all prophets his birth was legendary. According to one story, was strolling in the garden at Lumbini. Feeling tired, she sat under a tree and fell asleep. She dreamed that a six-tusked white elephant had entered her body. Following this the queen gave birth to a child through the right side of her rib-cage. After the birth of the child, named Siddhartha, his horoscope was made.

The horoscope predicted that he would become either a world monarch or a great ascetic.

Since Suddodhan did not want his son to become a hermit, he raised him in great luxury. Nothing sad or painful was allowed to touch the life of Siddhartha.

Shielding him from the harsh realities of life, the King created a paradise on earth for his beloved son.

So, Siddhartha lived his early life as a prince. And the prince was a man of exceptional physical appearance. In fact, there are numerous references to the perfection of his physical body. And the charming young Prince was married to Princess Yashodhara at a tender age. So as to get him more involved in worldly affair. Soon Siddhartha became father. But things soon turned out to be altogether different.

Legend says, it was a matter of four passing sights that brought in to light the ascetic in him and drove him out in quest of Truth. This is how the Prince saw them.

Now restless and dissatisfied with his opulent lifestyle, Siddhartha decided to renounce his kingdom, even his wife and son. He was just 29 when he longed for finding out some answers to the questions of life.

One night when everyone in the royal household was asleep, the young prince left the comforts of his home and went out in his quest for eternal truth.