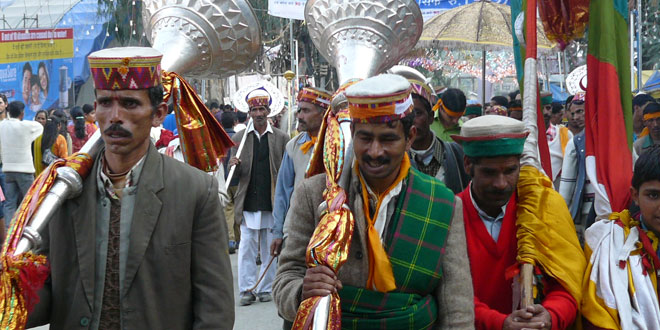 Holi in Himachal Pradesh is celebrated in much the same way as in rest of North India. People light bonfires-fires called Holika, symbolic of victory of good over evil.

People in this state are all charged up when it comes to play with colors. Pichkaris in various creative and innovative designs are specially bought by children to colour anybody who comes in sight and even more to the one who tries to escape… all in good fun.

The interesting fact to mark about Holi in Himachal Pradesh is that thousands gather at the holy shrine of Ponta Sahib in Sirmour district on the banks of Yamuna. The shrine is highly regarded and people have great faith in it. No wonder, they choose the auspicious day of Holi to seek divine blessings.

Kullu Holi is marked by mixing snow with colors – making it an ‘Ice-Holi’. While, the main celebrations are held at the world famous Slang Pass, which witnesses heaviest snowfall in the country.

The beauty of Sangla valley lies in the laid-back lifestyle that the residents lead and serene landscape of the valley. It is the place where you want to sit back and enjoy life at a leisurely pace. But, not during Holi. On Holi, it seems like the entire valley is vibrating with energy. People gather in the town and sway to the enchanting music of drums and trumpets. The local wine phasur freely flows and it feels like it’s not just the air that is full of colors and beats but souls are filled with magnetic energy.

It’s a two-day festival celebrated with an infectious joy that just spreads to the entire valley, from the oldest mountain to the youngest blade of grass. This year, the festival will begin on 1st March and end on the night of 2nd March with Holika dahan. The Holika dahan signifies victory of truth over sins and also is an opportunity for people to dress traditionally and sing and dance around the pyre. Holi is not just a festival here, it is a beautiful celebration where people demonstrate respect for their culture and tradition in the most jovial manner possible. The thousand year old tradition is preserved and displayed in a dynamic manner.

As summer hues creep over the cloudless skies of this town, the bright colors of Holi are prepared to paint the mountains red and the grass pink. Welcome to Kinnaur, a small district in Himachal Pradesh, where Holi is not just celebrated but revered.

Part of Kinnaur, Sangla Valley is a beautiful valley situated on the bank of River Baspa. Framed by high Himalayas, the valley is known for temples and monuments, and is popular amongst trekkers, campers and adventurers. It is a place where you can easily sit back, on the edge of a hill, with a cup or two of tea and watch the tranquil landscape and dancing clouds. However, during the month of March, this valley is draped in vibrant colors of the festival of Holi. The generally quiet town is dressed to embrace a festival that brings together people from all the surrounding villages as well as far-off places like Delhi. Holi in Sangla, Kinnaur is one of those experiences that will add value to your life, and one that every traveller needs to add to their bucket list.