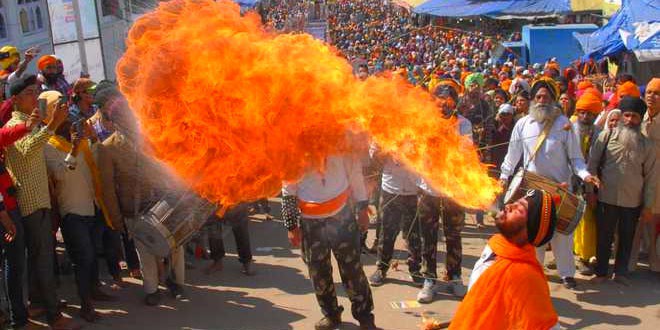 Hola Mohalla Begins in Anandpur Sahib: Tens of thousands of devotees converged on this Sikh holy town on Friday to offer prayers at Gurdwara Keshgarh Sahib during “Hola Mohalla” celebrations which coincide with the Holi festival.

All roads towards this holy town, which is home to the second most important Sikh shrine after Harmandar Sahib in Amritsar, experienced heavy vehicular movement with people coming in hordes on buses, trucks, tractor-trolleys and other vehicles.

“Thousands of people have arrived here for Hola Mohalla. It is a great atmosphere. Our family has also come to offer prayers,” Balbir Singh, a resident of Kharar town, 20 km from Chandigarh, said.

Anandpur Sahib is located about 85 km from Chandigarh.

The shrine and the town are famous as it was here in 1699 that the Tenth Master, Guru Gobind Singh, baptized five men and founded the Khalsa Panth, which is the modern day Sikh religion.

Elsewhere in Punjab, Haryana and Chandigarh, the festival of Holi was being celebrated with a lot of enthusiasm.

Despite rainfall in and around Chandigarh, and some parts of Punjab and Haryana on Thursday night, children and youth could be seen playing Holi on early Friday.

The skies cleared up on Friday morning over Chandigarh, allowing people to celebrate the festival.

“The rain and clouds went away in the morning. Otherwise, everyone was worried that the Holi spirit will be spoilt by the weather. This time, though, the weather is much colder than in previous years and people may not be playing as freely with water colors as in the past,” Ritu Goyal, a housewife in Chandigarh, said.