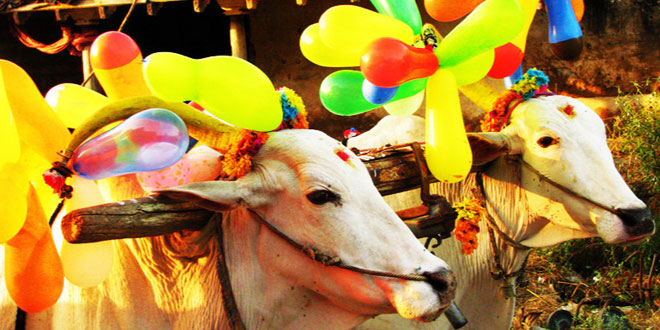 Four Days of Pongal: Pongal is a four-day harvest festival of Tamil Nadu, celebrated with gusto and fervor, by the Tamil in the state. All the four days of the festival (from 13th of January to 16th of January) are thoroughly enjoyed by the people. The festival is dedicated to Mother Nature, as farmers thank her for blessing them with bountiful crop. Each day of the four-day festival bears significance in one way or the other. Extensive Pongal rituals are performed by people. In the following lines, we have given information on the four days of Pongal.

Day One of Pongal – Bhogi

The celebrations of Pongal festival start with Bhogi / Bogi, which usually falls on 13th of January. One day prior to Bhogi, the households are clean, so that the premises become pious for the celebrations. People wake up early in the morning, take bath and make beautiful designs of kolam at the verandah of their home. On this day, people worship Sun God and agricultural equipment that are used to cut the crop. Thereafter, they would use the equipment to cut their paddy crop, which would ready to harvest. On Bhogi, people throw unwanted and old materials into fire, which symbolizes the end of old things and the beginning of the new.

The second day is the main day of Pongal festival and is celebrated as Surya Pongal. On this day, people wake up early in the morning, take bath and worship Sun God. Women would draw beautiful kolam at the entrance of their house. New rice, which was harvested in the previous day, is cooked on Surya Pongal. A new clay pot is used for the purpose. The rice is cooked with milk and jaggery, over the stove, in an open area.

The Pongal thus made is offered to Sun God. The rice-milk-jaggery mixture is allowed to boil well, until the rice falls. This is termed as Pongal. When the boiled Pongal overflows the pot, people would say loudly ‘Pongalo Pongal’! After the Pongal is offered to Sun God, people would relish on several Pongal dishes that are prepared especially for the day and then greet each other, wishing a very happy Pongal.

Mattu Pongal is the third day of the festival. This day is dedicated to farm animals including cow and ox, because they help the farmers to raise a crop and harvest it, successfully. On Mattu Pongal, the farm animals are bathed and then adorned in a beautiful way. Their horns are often painted and garland is wrapped around the horns. After applying tilak on the forehead of the cattle, people would offer Pongal to the animal. The farmers often take their farm animals for a round in the entire village.

The fourth and the last day of Pongal is known as Kaanum Pongal. In some parts of Tamil Nadu, Kaanum Pongal is also known as Karinaal. Sun God is worshiped on the day and people offer food along with Sarkarai Pongal. Sugarcane is offered to the deity as well as exchange among people to symbolize sweetness and joy in life. Kaanum Pongal is the time for people to pay visits to their loved ones and faraway acquaintances. Pongal songs and folk dances are performed by people, on Kaanum Pongal.