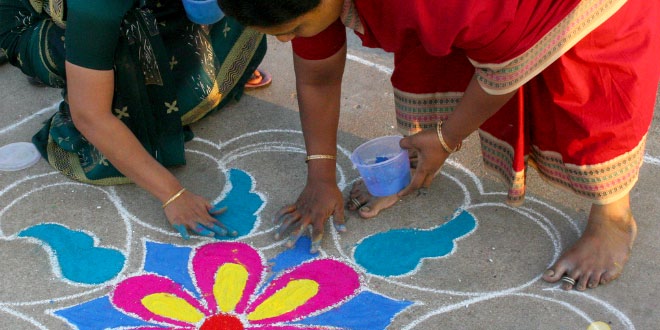 Indian Rangoli – Rangoli, also known as Kolam or Muggu, is a folk art from India in which patterns are created on the floor in living rooms or courtyards using materials such as colored rice, dry flour, colored sand or flower petals. It is usually made during Diwali (Deepawali), Onam, Pongal and other Indian festivals. They are meant to be sacred welcoming areas for the Hindu deities generation to the next, keeping both the art form and the tradition alive. Similar practices are followed in different states of India: Kolam in Tamil Nadu; Mandana in Rajasthan; Chaookpurna in Chhattisgarh; Alpana in West Bengal; Aripana in Bihar; Chowk pujan in Uttar Pradhesh; Muggu in Andhra Pradhesh; Golam kolam or kalam in Kerala and others.

The purpose of rangoli is decoration, and it is thought to bring good luck. Design depictions may also vary as they reflect traditions, folklore and practices that are unique to each area. It is traditionally done by women. Generally, this practice is showcased during occasions such as festivals, auspicious observances, marriage celebrations and other similar milestones and gatherings.

Rangoli designs can be simple geometric shapes, deity impressions, or flower and petal shapes (appropriate for the given celebrations), but they can also be very elaborate designs crafted by numerous people. The base material is usually dry or wet powdered rice or dry flour, to which sindoor (vermilion), haldi (turmeric) and other natural colors can be added. Chemical colors are a modern variation. Other materials include colored sand, red brick powder and even flowers and petals, as in the case of flower rangolis.

Rangoli I
Drawn in the front of entrance door of a home in the Southern India.

Rangoli II
Drawn in the front of entrance door.

Rangoli III
Drawn in the front wall of a home in Rajasthan, India.

Rangoli IV
Drawn in the front of entrance door of a home.

Rangoli V
Drawn in the front wall of a home in Rajasthan, India.
Share 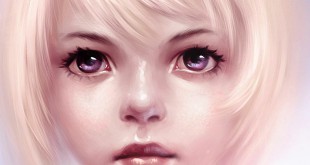 How To Draw Girl: Drawing Lessons for Students

How To Draw Girl: Drawing Lessons for Students and Children – Step – by – …