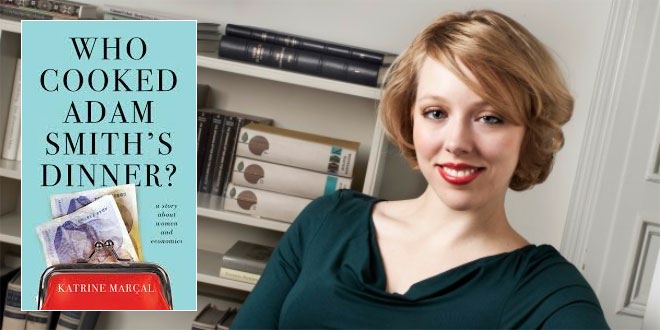 The 2008 global financial crisis still casts a baleful shadow, but most of the world still follows the same economic theories without too many questions. But as Christine Lagarde, before she became IMF chief, once quipped: Would Lehman Brothers – whose bankruptcy was among the causes of the crisis – have gone down if it had been the Lehman Sisters?

Katrine Marcal, who questions if the world has benefitted from the ‘dismal science’ (economics) remaining a preserve of patriarchy, however holds Lagarde’s “thought experiment is meaningless” for “the story of economics and woman is much bigger than that”, but still long unacknowledged or not given due importance.

Most of the dominant economic theories, she says, are instead based on the concept of an ‘Economic Man’, who is only in the pursuit of self-interest – as enunciated by Adam Smith in “The Wealth of Nations”: “It is not from the benevolence of the butcher, the brewer, or the baker, that we can expect our dinner, but from their regard to their own interest.”

But would the world have developed the same way, she asks in this book, if the father of the modern political economy, but a bachelor in his own life, ever thought if this self interest motivation was applicable to those who kept house for him and prepared his evening meal?

Examining consequences that flowed from basing theories on this principle of self-gain to the exclusion of other motivations, Marcal, in a passionate (with anger palpable but well-restrained) but reasoned and wide-ranging exposition on modern economics and its encroachment into other spheres of life, makes a compelling case that not only is ‘Economic Man’ far removed from human reality, he also distorts it, and above all, is ‘Man’ in the word’s most restrictive sense.

The author, a lead editorial writer for Swedish newspaper Aftonbladet where her focus is Swedish and international politics, economics and feminism, does take a marked feminist view – contending: “We cannot challenge Economic Man without feminism, and we can hardly change anything of importance today without challenging Economic Man” – but her critique is no less valid for her stance.

Feminism however “has always been about economics”, says Marcal, adding: “Virginia Woolf wanted a room of her own, and that costs money.”

Her exposition, which draws in not only the domestic set-up of the Smith household in 18th century Edinburgh, but also Robinson Crusoe, the Chicago School of Economics, Michael Foucault, Woody Allen, John von Neumann and Game Theory, the casinos of Las Vegas, Goethe’s Faust, David Bowie, the goose that laid the golden eggs, Florence Nightingale, atomic theory and several others, to make her point, is not only merely a feminist tract.

It makes use of feminism to attack this pattern of economics, which has become the dominant religion in the Western world (and much elsewhere too), but has done nothing to address disbalances and disparities.

“Our standard economic theories are based on a fictional character whose foremost characteristic is that he isn’t a woman,” she says, and adds that economists base decisions affecting millions on “their own assumptions about a masculine nature that not even men possess”, while the “feminine has been associated with what has almost always been constructed as that which must be subordinate to the masculine”.

The problem arises when economic theories become a continuation of the same story – and issues like “justice, equality, care, the environment, trust, physical and mental health are subordinate” to profits. You don’t need to be a feminist to be concerned – just reasonable and conscientious.

Love is not easy. Emotional turmoil and tiffs take their toll. Heightened sensitivity and expectations …