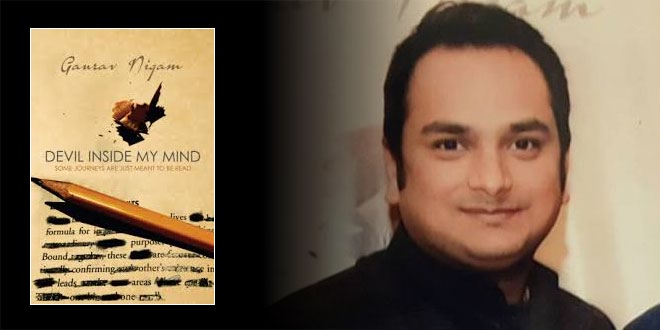 Imagine you are on a treadmill and don’t have a pause button or you are driving a car that has no brakes in it. For the individual in either of the situations, death or being seriously hurt is guaranteed.

Dr. Gaurav Nigam’s first book, “Devil Inside My Mind”, reflects this roller-coaster ride of the narrator Amit Saxena and his “unique living profile” with his struggles and triumphs pertaining to his obsessive compulsive disorder (OCD).

“This is not a text book on OCD. It’s a story about winning, about fighting your problems, no matter how bizarre they can be,” Nigam told.

The title of the book brings out the trauma that Saxena faces in his mind, that is, his obsessive compulsive disorder — a mental issue which absorbs him from his young age and also depicts a true acceptance to the fiend playing havoc in his life.

“I have severe OCD and it’s terrible, it’s demonic and you have no idea how I feel,” is Saxena’s confession, which brings out the honesty of the narration.

The cover of the book, which portrays a yellowish worn out paper on which words are scribbled, runs parallel with the title and, being struck off at various intervals, appears meaningless, which is the actual state of his life.

The book brings out the vivid insights about Saxena’s OCD and its effect on his day-to-day life. Essaying his doomed social life, the book reflects his struggle to fit in, compounded by the quirks associated with his OCD and the shocking and dreadful expressions of what all his mind dictates he do.

“I wanted to show a real picture of OCD and the tougher parts of anxiety disorder,” Nigam explained.

The OCD begins in Saxena, with the desire to become a topper and to conquer the achiever’s badge in school. This strong urge becomes the basis of his life and pushes him through gory and dingy lanes.

His OCD mind then divides the world into pure and impure and bullies him to touch a strange woman’s buttocks to supposedly purify her!

The OCD also numbs his already drowned mind with an absolute fear of failure and coerces him to shut the door on his best friend Raj in medical college hostel as the latter flunked in his exam.

Next, the demon advises him to remain free of contamination. In this pursuit, Saxena cuts off names of diseases from medical textbook, thereby rendering them powerless to spread.

The devil also instigates in Saxena the fear of needles and thus he dissects a cushion made of feathers, as he was fearful of it being the main cause of HIV.

Nevertheless, in each of the troubles that he faces, the book shows the tireless efforts that Saxena puts in the quest of a way out of the satanic bondages of the OCD.

Ultimately, he manages to create an OCD management tool box in which he feeds his body, soul and spirit certain positivity, in the same manner that his OCD in the brain used to feed his sheepish mind with bizarre thoughts.

Saxena models a cognitive self-therapy and behaviour modification such as empowering himself with Mozart’s rhythm and harmony to make its place into the inward regions of his soul, enabling him to fight with the compulsions of the demonic thoughts.

He satiates his creative mind by rendering a semi-circled corner for painting and begins practising meditation, which gives him the realisation of ultimate truth of spirituality.

Thus, Saxena begins channellising the OCD’s spurt in a positive manner and starts reigning over everything.

From controlling his diet to exercising and following strict discipline, he focusses everything on the self-rehabilitation and becomes a world-renowned pediatrician, rubbing shoulders with the creme-de-la-creme.

Saxena leaves a message to the readers by confessing that OCD has put him on top of the world and brought him down but he didn’t lose his life over OCD and advises them not to lose theirs either.

“I hope that readers would sense the struggles that people living with OCD go through and a determination for winning through their own problems,” Nigam concluded.