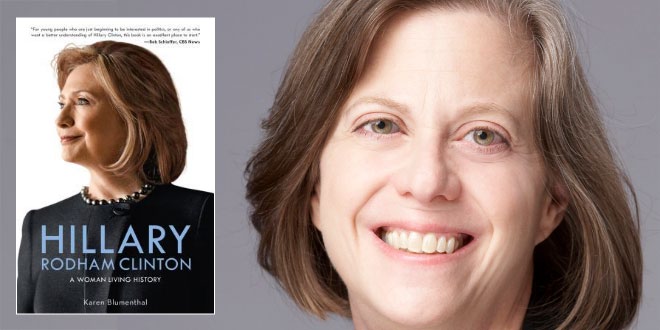 In 1969, the Wellesley College for women, near Boston, agreed to have a student speaker at its graduation ceremony – and the very first one abandoned most of her prepared text for an impromptu, impassioned rebuttal of the chief guest’s (a Massachusetts senator) address, and to outline her generation’s divergent goals and vision of politics.

The speech of (then) Hillary Rodham not only had different impact on different sections of the 2,000-strong audience – leaving stunned the older members, drawing some applause from younger ones, and a spirited, standing ovation from recent and current graduates – but also in media and the wider world with some complimenting her for upstaging the senator or commending her for emerging as a new voice, while others berated her for being rude and being too sure of herself.

As this biography by Karen Blumenthal brings out, this has long been the pattern of Hillary Clinton’s life – much admiration and respect but also much derision and hostility. This may be true for all politicians in a way, but for her, it began right from when she became a public figure as wife of the new governor of Arkansas in 1978. And it persists when she is two contests away from becoming the first woman to hold the world’s most powerful job.

This state of affairs is well reflected in books on her, which swing from flattering encomiums to vicious diatribes, but very few objective accounts. “A Woman in Charge: The Life of Hillary Rodham Clinton” by the legendary Carl Bernstein, of the Watergate investigation, is one of them but is now nearly over a decade old and in the period since then, she has served as US’ chief diplomat in some very turbulent years and has prepared for and mounted another bid for the White House.

And while Hillary Clinton can be idolised or reviled, her contribution praised or disparaged, she cannot be ignored, and there is no doubt her story is extraordinary as for most her life, she has “been defying conventional wisdom, breaking barriers, and baffling even closest friends with a bundle of personal contradictions”.

“After more than forty years in politics and public life, one question still remained: Who is she?” asks Blumenthal, who has earlier penned biographies of Steve Jobs and of Walmart founder Sam Walton, and tries to answer it by presenting Hillary Clinton’s story in 36 vivid and insightful chapters, spanning her journey from her birth (and being given a name then used for boys) and childhood in suburban Chicago in the late 1940s to the centrestage nationally and globally since the 1990s.

Blumenthal says she was unable to question Hillary herself, even over email, but has extensively plumbed through her books and statements, papers and memoirs from the Clinton archives – and also sources critical of her.

We learn about the influences in her life – from exacting father Hugh and supportive mother Dorothy, teachers and pastors, friends, colleagues and mentors, and finally Bill Clinton, and her experiences of the eventful 1960s that help to shape her thoughts and beliefs, and how these guided her and impinged on decisions about education, work, marriage and family life, and political career (from a committed Republican to committed Democrat).

Some were impetuous – her decision to choose Yale over Harvard to study law followed one leading, unnamed Harvard professor’s snide dismissal of women, while some – marrying Bill Clinton – were planned carefully though their earliest meetings were nothing short of comic – at one, he was loudly extolling how the largest watermelons were found in his state – and nearly melodramatic, with both mothers not very enthusiastic over their child’s choice.

While acknowledging Hillary’s calibre and achievements, Blumenthal is not shy of citing the many controversies and scandals that have been a part of her life, or of Hillary’s own missteps and contradictions but not judgemental. Supplementing the story are a multitude of small photos, and reproductions of negative and positive editorial cartoons that indicate public perceptions of her.

Whether Hillary becomes president or not, her life is most fascinating – and this is a detailed but accessible account of it.