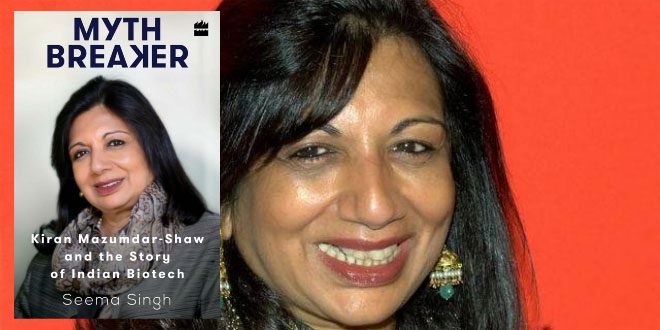 Start-ups may have become a familiar term in India in the past decade, but this lady dared to delve into such a mission — a domain dominated by men even today — more than three decades ago. The fact that she will be different from her peers was also evident rather early. For Kiran Mazumdar-Shaw, chairperson and managing director of Biocon, is also a trained brewmaster.

Shaw, who received Padma Shri in 1989, embarked on the start-up journey from her garage 37 years ago. She has managed to break the kind of myths that abound in the Indian scenario. Her’s is a start-up seeded nearly four decades ago in the field of life sciences, and not information or communication technology.

As “Kiran Mazumdar-Shaw & the Story of Indian Biotech” seeks to portray, she was also not an engineer and did not come from a business family. Biotech companies have traditionally started with science as the basis. But Shaw started with technology, and added science at the back-end, and then kept adding to it, says author Seema Singh, a journalist for over two decades, specializing on science and technology-related writings.

The book chronicles Biocon’s 37-year long journey like a story. It narrates how, over a period of time, Shaw became a brand ambassador: “Not just of a flegling industry but of innovation-led business in general. By interacting with the funding and regulatory agencies and the political system, she gave a face to the industry.”

The journey started in March 1978 when Shaw, who was in Baroda, was leaving for Delhi to fly to Scotland to begin work at a malting company. Les Auchincloss, the serial entrepreneur, wanted to meet her to give her a business proposal. The meeting took place in the forenoon.

“After a few weeks of experimentation with some enzymes at Barmalt Malting in Gurgaon she would join Moray Firth Maltings in Scotland. Three years earlier, she had returned from Australia with a degree in brewing which did not get her a job; she figured that being a woman brewmaster was not acceptable in India. It was not safe for the employers.”

When she got the business proposal she was in Baroda helping her father Rasendra Mazumdar wind up his business. After retiring as the chief brewmaster at United Breweries in Bengaluru, Rasendra Mazumdar had started a malting company in Baroda.

“Auchincloss finally pried Kiran loose from her Scottish employer by promising her that if she did not enjoy the work after a year, he would make sure she got the same job, or some other in the brewing industry in the UK.” And rest is history.

The book has beautifully intertwined Shaw’s life with the birth and evolution of Biocon. It has pictures of Shaw from childhood and also that of Biocon.

Describing Leslie Auchincloss as entrepreneurs’ entrepreneur, the book said he would pick his team members from different geographies, select people who could work together and innovate collectively.