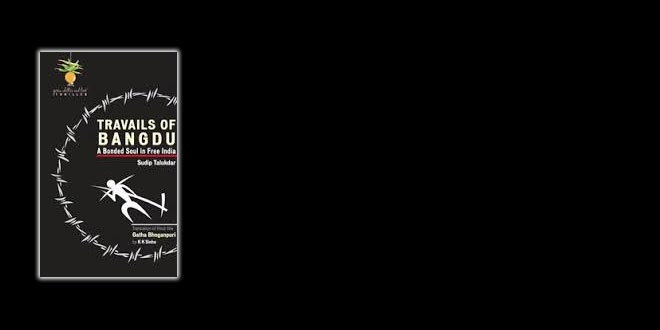 “Travails of Bangdu” pulls no punches in unmasking the crooked politics behind bonded labour, which condemns a segment of adivasis to a subhuman existence. An unapologetic feudal system does its best to keep the pernicious practice alive, long after independence and in brazen defiance of the law which proclaims equality for all.

The hard hitting novel highlights the plight of those that exist beyond the pale of media glare and academic discourse. Published originally as ‘Gatha Bhoganpuri’ in Hindi, the ‘Travails’ can be read either as an incisive social document or as a fictionalised account of the author’s own experiences in one of the country’s most backward rural pockets.

The dehumanising practice prompts a freshly minted IAS officer to take the initiative to emancipate the hapless victims from the vicious cycle of poverty and marginalisation. Soon, he is drawn into a web of deceit, half-truths and conspiracies, risking the collective hostility of politicians, landowners and the lower rungs of bureaucracy. Checkmated at every stage by inimical forces bent on subverting reforms, will he succumb to their machinations or succeed, remains the moot question.

One makes the discovery that it takes very little for inimical forces to shatter the deceptive calm and somnolence of rural society. Self-abnegating, semi-starved Bangdu, with only tatters to cover his nakedness, is the pivot around which the narrative revolves. His victimisation at the hands of landlords and lowly minions like the watchman reflects a world governed by greed, covetousness and duplicity, enforcing its writ through money and muscle power.

Author Sinha made his debut with ‘Gatha Bhoganpuri’, growing out of his involvement with the welfare of Kols and Bhils in Bundlekhand, during his very first posting as a sub-divisional magistrate. The book has been acclaimed for its sensitive portrayal of bonded labour. It conjures up a world gone by, with its share of quaint police stations, havelis and British-era relics such as the dak bungalow, official residences and courtrooms.

The translator, journalist and columnist Sudip Talukdar, retains the flavour of the original in its English version. His eye for detail, combined with a few deft strokes of his pen, imparts immediacy and verisimilitude to the cast of characters and the situations.

Kallu Pandey, one of the landlords, is the prototype of the ‘Bhai’ popularised by Bollywood. His den lies behind the municipal office, where he holds daily court, protected by fierce-looking gunmen and dispensing justice or sorting out “problems” for a consideration. Normally, he entertains petitions of suspended or terminated municipal employees.

Among the other plus points of the books are the several black and white illustrations, which vivify characters like Bangdu, with his matted hair and emaciated frame, or the burly Dadu Singh puffing on the hookah, under the shade of a tree. A glossary has been thoughtfully appended at the end of the translation for readers who may not be familiar with Hindi terms.