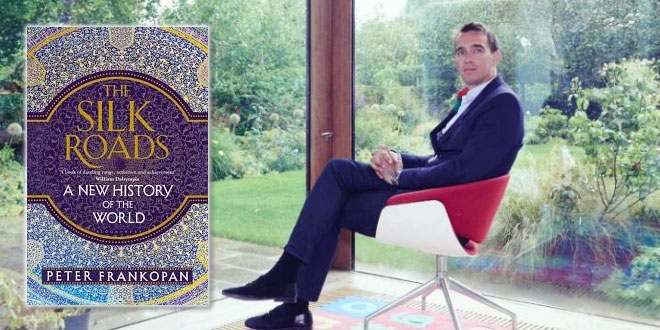 The Silk Roads: A New History of the World – Peter Frankopan

Writing a comprehensive history of the world was a lot easier in the times when there was not so much history and just a part of the world was known, and the focus mainly on the role of one’s homeland in civilisation’s advance. In our age, the range of any such effort will be much greater – and may be difficult to visualise in less than a shelf full of massive tomes. Usually.

Pulling it off within one volume (though large-sized) is a no mean feat in itself. But with it, Peter Frankopan goes further in also making a compelling case for replacing the usual linear story of various (Western) civilisations for an older and dynamic interplay of forces – economic, cultural, military and religious – across Asia, from the Mediterranean to the Pacific, in shaping world history. But it is not just the famed Silk Road of antiquity that is his focus, but rather a series of ‘Silk Roads’ on “which flowed ideas, goods, disease and death and empires were won and lost”.

But the area they span – an expanse quite close to what British academician Halford Mackinder’s “Heartland” of the “World Island” and American political scientist Nicholas Spykman’s “Rimland” – has rarely received the attention it merits.

As the author, an Oxford academician, recalls when young, one of his most prized possessions was a world map from which he had memorised many countries and physical features but as a student, he grew “uneasy about the relentlessly narrow geographic focus of my classes at school, which concentrated solely on western Europe and the United States and left most of the world untouched”. Many of us, in various parts of the world, may have correspondingly similar tales to relate and similar gaps that we have been curious about.

But Frankopan made an extensive effort to assuage his curiosity – and the outcome does not disappoint. In this masterful and engrossing account, there is much to inform and illuminate, and patterns we may have never suspected are revealed – the connection between a Bengal famine and the American War of Independence, between the Taj Mahal and the Spanish empire in the New World, between Western consumerism and residual anti-Western sentiment in the Middle East, as well as the first – much earlier – appearance of trends like globalisation and of strategic choices currently bedevilling the world, like the Western (particularly American) penchant of striking alliances with Islamists to tackle secular adversaries.

All this and much more is part of this work’s broad and colourful pageant that spans the era of Alexander the Great, who Frankopan holds was not the “drunken juvenile thug” as some modern scholars dismiss him but someone who genuinely tried to co-opt traditions of conquered realms to maintain control, to the Americans and their misadventures in the Middle East from the 1950s down to the present day. Adding to the interest is a varied cast of rulers, soldiers, spies, merchants, explorers, religious leaders, and more from not only this region – and elsewhere.

Also enlivening are some incisive comments which may seem contentious but are actually uncomfortably true – such as the Europeans’ historical propensity for violence.

In two dozen odd chapters, Frankopan presents a meticulously-arranged but always interesting of the ‘roads’, and their role in the passage of faiths, concord, gold and silver, and later black gold, but also slaves, revolutions, death and destruction, and genocide. They sometimes may have strangely unexpected directions – to northern Europe and Scandinavia (though this may not surprise those who have read Michael Crichton’s “Eaters of the Dead” or Jan Guillou’s “Crusaders Trilogy”).

And in a work of this magnitude, some mistakes were inevitable but are thankfully few – three, by my count.

With the modern world seeing the rise of India and China, the continuing significance of central Asia and of West Asia (and its potential to cause headaches and tragedy eve far away), the Chinese plans for the (new) Silk Road Economic Belt and the Maritime Silk Road, it was high time the influence and impact of the older ones – which seem to be getting restored -was reprised. This is this work’s real worth.

Share
Previous On Intelligence: The history of espionage and the secret world – John Hughes-Wilson
Next Travails of Bangdu – K.K. Sinha