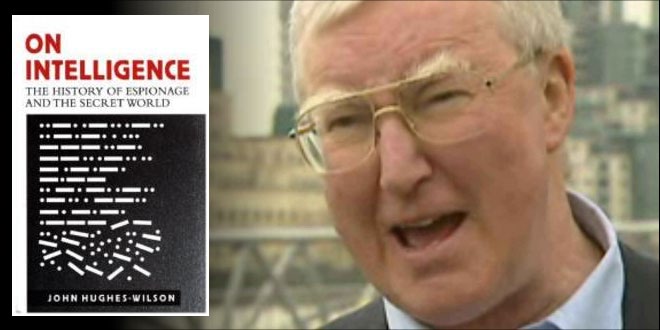 On Intelligence: The history of espionage and the secret world – John Hughes-Wilson

Wars have been won – and lost – based on how enemy intelligence is obtained, interpreted and acted upon. And if thrilling stories on edge-of-the-seat espionage keeps you hooked, then this book will offer you a peep into a world of mystery and intrigue.

Right from the biblical period to the present day, intelligence has been much sought after to get a winning edge over adversaries.

A Greek legend has it that Histiaeus of Miletus had cut the hair off a servant’s head, tattooed a crucial message on to the shorn scalp and let the hair grow back. The men of King Darius let him pass, little realizing that the vital intelligence was on, and not in, his head. Then there were others like Sun Tzu who thought deeply about intelligence and whose observations are still relevant today.

In more recent times, Colonel John Hughes-Wilson writes, if you want to collect human intelligence on militant Islamists, then you have to, at the very least, talk to bloodthirsty and experienced decapitators.

The espionage by Chief Warrant Officer John A. Walker of the US Navy may not immediately ring a bell, but Cambridge’s Famous Five certainly will.

The most familiar examples of ideological spies are the so-called ‘Cambridge Five’ – Burgess, MacLean, Philby, Blunt and Cairncross. “What bonded many of them together was the impact of their sexual preferences on their treachery. They were phenomenally successful. The wider Cambridge Ring, eventually penetrated the innermost secrets of the British State and from 1940, was providing Moscow with virtually every secret known to the British.”

One of the great puzzles on whether he did it for money or for ego is about Robert Hanssen, “the traitor responsible for the FBI’s worst security breach ever”.

Hanssen was successful at this dangerous game for mind-boggling 22 years. Quite interestingly, he managed to hide his identity from his Soviet handlers as well as the FBI. In 1979, Hanssen approached the GRU – the Soviet military intelligence agency – and offered his services. His trade craft was ingenious. He remained anonymous and just pushed hard-copy classified material to the Soviets via dead letter-boxes, which he alone selected.

An interesting aspect was about the Poles managing to crack the ‘unbreakable’ Enigma machine, which had redefined the ability to send off and receive cryptic messages. The Poles had astonishingly managed to build their own and forged way ahead of others “using an impressive mixture of theft, ‘reverse engineering’, mathematical logic, commercial purchases and sheer brain power”.

On August 16, 1939, barely three weeks before Hitler invaded Poland, the British received a working Enigma set with “extra plug-board settings and Polish ‘cribs’ on how to make it work”.

Incidentally, those charged with the air defence of the Third Reich always knew when a big air raid was on its way, from the chatter as the USAAF and RAF aircrews tested their radios before taking off – simple stuff but vital intelligence.

Photo recce missions reached its nadir due to the U-2 overflights. On October 14, 1962, a U-2 overflight brought back 928 pictures confirming an SS-4 Soviet nuclear missile site under construction at San Cristobal, in western Cuba. It was a Cold War bombshell.

Days later on October 27, a U-2 piloted by USAF Major Rudolf Anderson was shot down by an SA-2 Guideline SAM missile launched by Cuba. Anderson was killed.

The demise of U-2 as a high-altitutde collector of photographic intelligence was paralleled by two developments – the extraordinary SR-71 Blackbird and the coming of age of satellites. Built of titanium and with radar reflecting composite material, the SR-71 could fly at 80,000 feet and 2,000 miles per hour.

More recently, there are the cases of Bradley Manning, Edward Snowden and Julian Assange’s Wikileaks, whose disclosures sent shock waves across world capitals.

The book is replete with examples of thrilling true stories that give a precious insight into the way world events panned out.

It points out that before the horrific 9/11 terror attack, the Minneapolis FBI was tipped off by a local flying school that a suspicious Arab had joined the flying course and was interested in ‘flying large commercial airliners’. During the probe, they found he wasn’t interested in take-offs or landing but only in flying the Boeing airliner simulator.

“However, the FBI’s Washington lawyers refused to apply for a court order against the suspect.” It clearly shows that 9/11 could have been avoided if America’s post-Cold War intelligence agencies had adapted to the new world of international terrorism.

If espionage intrigues you, then this is the book for you. And even if it doesn’t, still the book will hold your attention and keep you hooked.