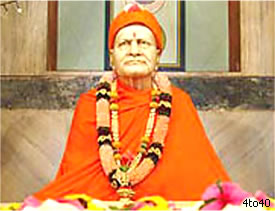 Swami Yogeshwaranand Saraswati was counted amongst the most popular as well as most learned Yogis of the 20th century. His life, which was spent mostly in the Himalayas, is the perfect example of extreme renunciation and asceticism. Yogeshwaranand devoted himself completely towards the realization of the soul and God. He was a major proponent of yoga and aimed at reviving the ancient science. With this biography, you will be able to know more about Swami Yogeshwaranand Paramahansa.

Swami Yogeshwaranand Saraswati was born as Brahmachari Vyas Dev ji, to extremely rich parents. However, he left his home at the tender age of twelve, in search of knowledge and self-realization. His entire youth was spent in studying Sanskrit language and mastering the scriptural knowledge. Some time later, he went to the Himalayas and practiced the most difficult tapasya and yogic sadhana. All the while, he was in the search of a guru, who could help him in attaining his goal.

In the process, he came across Yogi Paramananda Avadhoot, a great ascetic who helped him in perfecting shunya (void) samadhi. However, his search for a real guru ended when he met Avadhoot Swami Atmanand ji in a cave near Gangotri (in Himalayas). From Atmanand ji, he got to learn Samprajnata samadhi and awareness of various processes of nature in the state of samadhi, the ultimate divine knowledge. Throughout his life, he kept meeting great ascetics, learned from them and attained higher stages in yoga and meditation.

Some of the Samadhis of Swami Yogeshwaranand Saraswati lasted for several weeks. In the end, he used to wake up with advanced knowledge of self-realization, origin & conclusion of cosmos and the objective of human existence. Throughout his life, he imparted his knowledge to people belonging to different faiths as well as different countries. Swami Yogeshwaranand Paramahansa also traveled abroad to spread knowledge. He breathed his last on 23rd April 1985, at the age of ninety-nine.

Share
Previous Swami Sivananda
Next Why is sea air good for us?