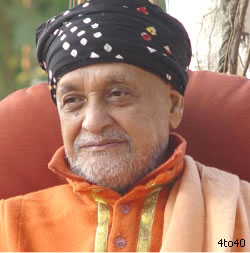 Swami Satyananda Saraswati belonged to the Dashnami lineage of Adi Shankaracharya. He is one of the members of the tribe of Swamis who are called for the order of “Saraswati”. In the other words, he is one of the sanyasi-scholars, who live the life of a Brahmin and believe in both knowledge and devotion. Paramahamsa Satyananda Saraswati is one of the most famous Yoga Gurus, not only in India, but also in the West. Get to know more about the guru with this biography.

Swami Satyananda Saraswati was born in the year 1923, in Almora town of Uttar Pradesh. At the tender age of six, Satyananda started having spontaneous psychic and spiritual experiences. During such events, he used to become completely unaware of his body for quite a long time. By the time he reached fifteen years of age, Satyananda started practicing Kundalini Yoga. In another two years, he began asking complex questions like ‘what is the difference between perception and experience?’

At nineteen years, he decided to find a Guru who would guide him towards the highest state of consciousness and left his house in this pursuit. It was in the year 1943 that he met Yoga Master Swami Sivananda Saraswati in Rishikesh city of Uttar Pradesh and his search came to an end. He stayed with the Guru for a period of three years. Thereafter, he was initiated by Sivananda Saraswati into the Dashnami order, as a Poorna as well as a Paramahamsa Sanyasi. He was then given the name of ‘swami Satyananda Saraswati’.

Paramahamsa Satyananda completed his initial sanyas training of twelve years in the year 1956. This was followed by his initiation into Kriya Yoga, again by Swami Sivananda. Thereafter, he began to practice Parivrajaka (Mendicant) stage of sanyasa. During this period, Swami Satyananda Saraswati traveled all over the Indian subcontinent. This travel helped him in meeting numerous saints of that time as well as knowing the needs of the society. Swamiji spent years in seclusion, practicing and perfecting his Yoga Sadhana.

Swami Satyananda Saraswati went on his first World Tour in 1968, under the guidance of his Guru. This was followed by several international and national tours, to promote the teaching of yoga. In July 1963, after Swami Sivananda Saraswati passed away, Swami Satyananda established the headquarters of his mission in Munger city of Bihar. In the subsequent years, he set up the Bihar School of Yoga, International Yoga Fellowship Movement, Sivananda Math and the Yoga Research Foundation.

In 1973, Paramahamsa Satyananda Saraswati was recognized as an Adept (God realized Yogi). The International Yoga Convention was held to commemorate the Sanyasa Golden Jubilee renunciation of Swami Sivananda. It was here that the renowned saints and sages of India accepted him as one of the principal experts in the filed of esoteric knowledge as well as the leading proponent of Yoga.

In the years that he devoted to Yoga teaching, Swami Satyananda Saraswati mastered over eighty masterful Yoga texts. He renounced teaching, in 1988, to take up the lifestyle of a Paramahamsa. After settling in the small village of Rikhia, he has been leading a life of meditative seclusion. Today, he involved in the practice of the severest of the Vedic Sadhanas, such as the Panch Agni Sadhana. He still meets people once in a year, for few weeks, to share his radiance of truth with them.

Share
Previous Swami Ramdev
Next Why is radioactivity dangerous?