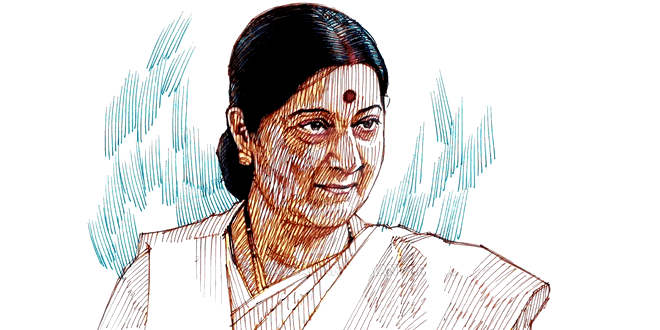 Sushma Swaraj is an Indian politician and the current Minister of External Affairs of India, in office since 26 May 2014. A leader of Bharatiya Janata Party, Swaraj is the second woman to be India’s Minister of External Affairs, being only after Indira Gandhi. She has been elected seven times as a Member of Parliament and three times as a Member of the Legislative Assembly. At the age of 25 in 1977, she became the youngest cabinet minister of north Indian state of Haryana. She also served as 5th Chief Minister of Delhi, for a brief term in 1998.

In Indian general election, 2014, she won from Vidisha constituency in Madhya Pradesh for a second term. She became the External Affairs Minister in union cabinet on 26 May 2014. She retained her Vidisha parliamentary seat by a margin of over 400,000 votes in the 16th Lok Sabha in the general election held in May 2014.

Sushma Swaraj (né Sushma Sharma) was born at Ambala Cantt in a Hindu Brahmin family on 14 February 1952 to Hardev Sharma & Shrimati Laxmi Devi. Her father was a prominent Rashtriya Swayamsevak Sangh member. She was educated at Sanatan Dharma College of Kurukshetra University in Ambala Cantonment and earned a Bachelor’s degree with majors in Sanskrit and Political Science. She studied law at Punjab University, Chandigarh, and practised as a Supreme Court of India advocate from 1973. A state-level competition held by the Language Department of Haryana saw her winning the best Hindi Speaker award for three consecutive years.

Swaraj is married to Swaraj Kaushal, a senior advocate of Supreme Court of India and a criminal lawyer who served as Governor of Mizoram from 1990 to 1993. Swaraj Kaushal was a member of parliament from 1998 to 2004. The couple have a daughter, Bansuri, who is a graduate from Oxford University and a Barrister at Law from Inner Temple.

On 6 August 2019, Sushma Swaraj reportedly suffered a heart attack in the evening after which she was rushed to AIIMS Delhi, where she later died.

Top 5 quotes from Sushma Swaraj’s speech at the UNGA: