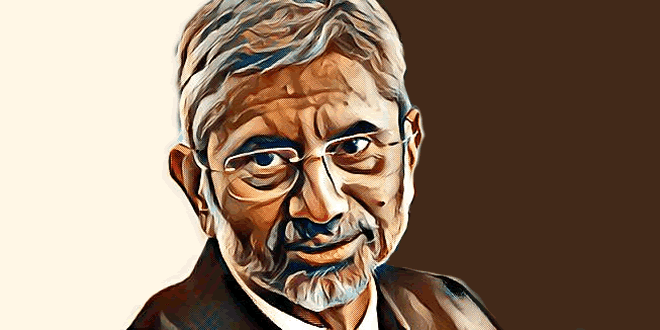 S. Jaishankar is an Indian diplomat turned politician who is the current Minister of External Affairs of the Government of India since 31 May 2019. He is a member of the Bharatiya Janata Party and is a Member of Indian Parliament in the Rajya Sabha since 5 July 2019, representing Gujarat. He has previously served as the Foreign Secretary from January 2015 to January 2018.

He joined the Indian Foreign Service in 1977 and during his diplomatic career spanning over 38 years, he served in different capacities in India and abroad including the Ambassadorial assignments to the United States (2014–2015), China (2009–2013) and the Czech Republic (2001–04), and as the High Commissioner to Singapore (2007–09). Jaishankar also had played a key role in negotiating the Indo-US civilian nuclear agreement.

On retirement he had joined Tata Sons as the President, Global Corporate Affairs. In 2019, S Jaishankar was conferred with Padma Shri, the fourth highest civilian award of the country. On 30 May 2019, he was sworn in as a cabinet minister in the second Modi ministry. He was made the Minister of External Affairs on 31 May 2019. He is the second former Foreign Secretary to head the Ministry of External Affairs at the Cabinet-level.

He did his schooling from Cambridge School Srinivaspuri and is a graduate of St. Stephen’s College at the University of Delhi. He has an MA in Political Science and an M.Phil and Ph.D. in International Relations from Jawaharlal Nehru University (JNU), where he specialized in nuclear diplomacy.

S Jaishankar was then Deputy Chief of Mission at the Indian Embassy in Tokyo from 1996 to 2000. In 2000, he was appointed India’s ambassador to the Czech Republic.

From 2004 to 2007, Jaishankar was Joint Secretary (Americas) at the Ministry of External Affairs in New Delhi. In this capacity, he was involved in negotiating the US-India civil nuclear agreement and improving defence co-operation, including during relief operations following the 2004 Indian Ocean tsunami.

In 2006–2007, Jaishankar led the Indian team during the negotiations on the 123 Agreement with the United States.

Jaishankar is married to Kyoko, who is of Japanese origin and has two sons – Dhruva and Arjun – and a daughter, Medha. He speaks Russian, English, Tamil, Hindi, conversational Japanese and some Hungarian.