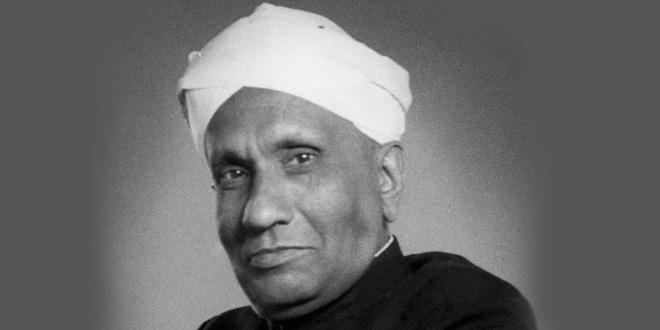 He discovered that, when light traverses a transparent material, some of the deflected light changes in wavelength. This phenomenon is now called Raman scattering and is the result of the Raman effect. In 1954, he was honored with the highest civilian award in India, the Bharat Ratna.

Sir Chandrasekhara Venkata Raman was one of the greatest scientists of India and was awarded the Nobel Prize in 1930 for his outstanding discovery in Physics. It was named after him and known as “Raman Effect”. Besides this he was the recipient of many other prestigious awards including the Lenin Peace Prize in 1958.

Chandrasekhara Venkata Raman was born on 7th November 1888 at Trichnopoly in Tamil Nadu. His father was a professor of Physics at Mrs. A.V.N. Colleqe, Waltair. Raman was a very brilliant exceptional student and right from his childhood. After passing his matriculation at the age of 12, he was admitted to the Presidency College, Madras. From there he passed his B. A. in 1904 and M.A. in Physics in 1907. He got first position in the University in M.A. While he was student in the Presidency College, he modified “Melde’s theory on sound”. He also worked on “Diffraction of Light“. His first paper appeared on this topic in 1906.

In 1907, after passing a civil service competitive examination, he became the Deputy Accountant General in Calcutta. In 1915, he met Sir Aushotosh Mukherjee, the Secretary of the Indian Science Association. Raman joined this Association as a member and started his research work. In the year 1917, he resigned from his job and became the Professor of Physics at Calcutta University.

During a sea voyage to Europe in 1921, he observed with wonder brilliant blue colour of the Mediterranean, and later the blue colour of glaciers. After returning to India he experimented on the diffusion of sunlight in its passage through water, transparent blocks of ice and other materials. He explained the reason of the blue colour of the ocean. Systematically pursuing his researches in this field, Raman was led to the discovery of “Raman Effect” in 1928. He used monochromatic light from a mercury arc and the spectroscope to study the nature of diffused radiations emerging from the material under examination. For this discovery he was awarded Nobel Prize in 1930. He became a fellow of the Royal Society of London in 1924.

He also worked in the field of magnetic attraction and theory of musical instruments. He continued as Professor for 15 years.

In 1933, he became the Director of Indian Institute of Science, Bangalore. He held this post for 10 years. In 1934 he sponsored the foundation of the Indian Academy of Sciences, of which he became president. In 1943, the Raman Research Institute was set up by him. Then he conducted research work for the rest of his life. He died on 21st November 1970 at Bangalore.